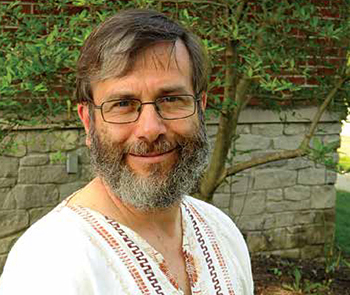 A "bridge between cultures"

Professor of education and Spanish

Dr. Paul Neufeld Weaver’s history with Latin America spans decades, helping him design and implement two of Bluffton’s cross-cultural experiences in the region. Last year he led a student group to Colombia for the second time, while next year he’ll lead the second semester-abroad experience in Guatemala.

“I feel like my personal mission is to be a bridge between cultures, and that’s only possible if you maintain your close connections to both cultures,” said Neufeld Weaver, now the director of the university’s cross-cultural programs.

After joining the Bluffton faculty in 2006 to teach education and Spanish courses, he was quick to formulate a new cross-cultural opportunity for students. He proposed a trip to Colombia in 2008, and two years later he led the first group of Bluffton students to the country.

He and students spent the majority of their three-week stay with host families in the capital city of Bogotá, partnering with the Colombia Mennonite Church and Mennonite Central Committee. Together they learned about the decades-long civil war that has displaced more than 10 percent of the population and has taken the lives of an estimated quarter million people.

The group attended local churches and discussed ways in which Christians can be peacemakers and can care for those who have been traumatized by the war, which has been ongoing since the 1960s, Neufeld Weaver said. “Part of our purpose in being there is to let local communities know that people in the rest of the world care about what’s happening to them,” the associate
professor explained.

While Colombia is ranked roughly in the middle of the world’s nations in terms of development —with a GDP of roughly $9,000 per capita— about a third of the country’s citizens live below the national poverty line, according to the World Bank Group. “It’s not the poorest country in the world, but if you go to some regions of Colombia, you’d think you were in the poorest areas of the world because wealth is so unequally divided,” Neufeld Weaver said.

In fall 2015, he will begin spending the majority of a year in Guatemala. For the first semester, he will supervise eight Bluffton students, who will take courses in Spanish and Latin American history at the Latin American Anabaptist Seminary (SEMILLA) as well as gain an introduction to the country’s conflicts.

He will then enter a sabbatical semester in spring 2016, remaining in Guatemala to study bilingual education and the ancient Mayan language of Q’eqchi’. “All three of the languages I speak” —English, Spanish and Portuguese—“ are European-originating languages,” he said. “I’ve always wanted to learn an indigenous language that originated here in the Americas.”

“To adequately be who I’m called to be, I need to spend more time in another context,” he added. “So I need to spend a year in Guatemala —spiritually, intellectually, emotionally and culturally.”