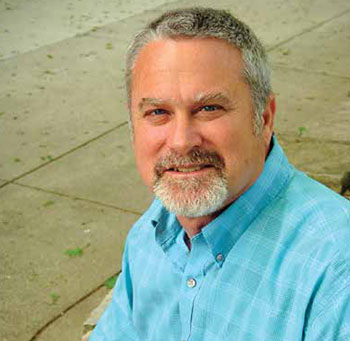 Dr. Randy Keeler has been leading cross-cultural experiences at Bluffton for years—and they have changed his worldview.

Keeler has supervised eight groups of student travelers, most of them destined for the Holy Land of Israel and Palestine but also, a few times, for the Caribbean island of Trinidad.

The associate professor of religion described his first experience in the Holy Land, in 1993, as a “whirlwind trip.” It was seven days of seeing major sites in Israel, such as the Sea of Galilee, Jerusalem and the Dead Sea.

Afterward, Keeler realized something was missing: The landmarks, and struggles, of Palestine had been ignored. “It was really a one-sided kind of trip,” he said.

As he and his colleagues prepared for their next visit, they worked closely with Mennonite Central Committee and with conflict resolution groups in the Holy Land. “I started hearing this totally different narrative than what I heard the first time I went,” he
said.

“During the course of time, my interest in being in the Holy Land became more about the issue of conflict between Israelis and Palestinians than about visiting the sites,” he added.

Keeler spent the next several years studying the conflict, and students who select the Holy Land experience now receive an introduction to it in advance. Once there, the students spend a week in the West Bank and two nights with a Palestinian family, in addition to time in Israel.

“At the least, as Christians we should be concerned,” he said about conditions and violence engendered by the ongoing conflict. “Muslim/Christian doesn’t matter anymore; this is a humanitarian issue.”

In the early 2000s, Bluffton developed a cross-cultural experience in Trinidad, also led by Keeler. The focus has been on seeing how churches and missionaries work in a different culture. While there for three weeks, he and students interact with various Christian churches and spend about three days of one week doing service work.

Trinidad, which gained independence from the United Kingdom in 1962, suffered for many years at the hands of Western colonialism, Keeler said. For a long time, for example, slavery and indentured servitude were common, leading to a large population of people of African and Indian descent, while displacing the indigenous people.

The history of colonialism has led to significant economic disparities as well. “Once you go inland, you see real poverty. In Trinidad you can still see people living in these boxed houses they make out of plywood.” While Trinidad is the wealthiest nation in the Caribbean, he noted, there is still a great need for aid to the churches and the people.

Whether in the Holy Land or on Trinidad, Keeler hopes that students gain a respect of the cultures along with firsthand  understanding of the problems that inhibit prosperity. He plans to lead another trip to the Holy Land next May and to Trinidad in May 2017.