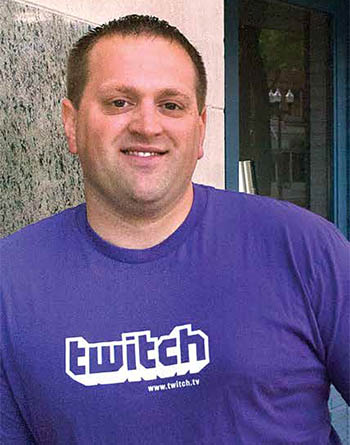 Working in talent management in the booming electronic sports (eSports) industry, Brandon Freytag is pursuing a dream he’s had since high school.

Also known as competitive gaming, eSports is a term for organized, multiplayer video game competitions. Freytag is currently the sales executive for GoodGame, a talent management and creative agency in the field of professional video gaming. He
and his colleagues connect professional gamers with sponsors and host promotions for tournaments and upcoming games through live streaming, website building, event planning and marketing.

He got involved in the industry mainly “because I enjoyed it,” he said. “I never thought it would make me a ton of money, nor did I ever think it would become a career.”

An early start
Freytag’s interest in professional gaming began in high school, when the popular multiplayer game Counter-Strike was all the rage among his friends. But he never felt he would be good enough to compete in tournaments, so he began to seek more
of a background role in the business.

He started cold-calling companies and, after a few conversations, was able to connect a local gamer with a sponsorship with Razer, a product specialist in gaming gear, like branded keyboards and headsets. “They sent me boxes of computer mice,
and it was the coolest thing,” he said.

But Freytag never thought he could become a talent agent in eSports, which was in its infancy at the time. He decided to continue his education at Bluffton, where he studied business administration, graphic design and marketing.

Acquiring, and using, the tools
“When I went to Bluffton, I think I did learn quite a bit” about business, accounting, cold-calling and developing marketing campaigns, he said. “I wasn’t very convinced of myself, but I think over time, Bluffton helped me develop skills to better present” in business settings.

Shortly after graduating in 2008 and becoming a district manager for Speedway, Freytag was contacted by a professional eSports team called Evil Geniuses. The team offered him a small income to help find sponsors. He eventually landed Evil Geniuses a sponsorship with Monster Energy—a producer of energy drinks —which proved to the team and to himself that he could make a career of talent management.

“That was my big showcase of what I could do. Back then it was a huge monetary sponsorship,” he said.

Living the dream
Soon thereafter, Freytag became a shareholder in Evil Geniuses, landing more than 20 sponsorships for the company. Rebranded as GoodGame, the company then shifted its focus from managing a single team to promoting multiple teams, events and games.

He left Speedway in December 2014, when GoodGame was acquired by Amazon, which had also just purchased the popular live streaming site for gamers, Twitch, for just under $1 billion. As part of Freytag’s new contract with GoodGame, he was permitted to work from home instead of moving to Twitch headquarters in San Francisco.

Today, Freytag is living out his dream with his wife and two children at their Troy, Ohio, home. “It’s a dream come true to be able to do it full time,” he said.