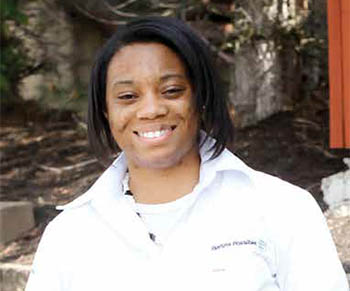 If you had told Francena Tate a few years ago that she would get a job offer from AT&T just two days after graduating from Bluffton, she either wouldn’t have believed you or she would have started jumping up and down excitedly.

What she might have believed, though, was that her passion for coaching and management, and the skills she gained at Bluffton, would someday translate into a promising career.

Tate applied to AT&T during her senior year and, after a couple interviews, was offered a network operations manager position following her May 2013 graduation. She was then flown to AT&T headquarters in Dallas for 10 weeks of training.

Getting out of the zone
She had never been that far west, and she was tasked with flying—alone—for the first time since she was an infant. But she knew that in order to succeed, she would have to step out of her comfort zone, which for the previous two years had included the tranquility of Bluffton and playing point guard for the women’s basketball team.

“One thing that’s really important to realize,” she said, “is that you have to be able to branch out.”

Learning the ropes
For the first six weeks of her training, Tate worked as a technician, learning to install and maintain phone, Internet and  television services for AT&T’s emerging U-verse technology.

Although she was in an unfamiliar environment and had to work long hours under the scorching Texas sun, Tate knew that to effectively manage a team, she had to fully understand its role. The training “allowed me to see what my technicians go through day in and day out,” she said. “These guys are out in all types of weather, all types of conditions, and it can be a very dangerous job.”

The remaining month of her training was dedicated to management. A sport management and business administration major at Bluffton, she learned more about such skills as labor relations, employee motivation, public speaking and preparing
presentations.

Looking back on Bluffton
The skills she acquired in her Bluffton classes helped prepare her for success during her training. “I often thought throughout my management training, ‘I remember learning this in marketing class!’” she said. “It was kind of like an ‘aha!’ moment.”

Tate now supervises a team of technicians in Cleveland —a position she never thought she could reach in just two years beyond Bluffton. While grades matter, she said, it’s also “very important to understand the invaluable experiences gained from various on- and off-campus internships and events. Being involved in the career center and getting experience helped me gain confidence and learn different career options.”

After such a successful launch to her career, she doesn’t currently plan on going anywhere, except within the company. “The great thing about AT&T is the size,” she said. She hopes to eventually branch out into different departments, or even different states, to gain a better understanding of how to best meet customers’ needs.

“I was one of five hired for this opportunity in 2013 in the entire nation,” Tate added. “That definitely makes the Bluffton experience worth it!”