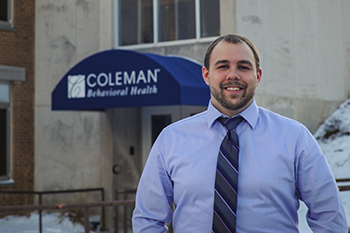 Just 12 weeks shy of obtaining his bachelor’s degree as an intervention specialist, Jacob Stabler fell in love with the social work electives he was taking and chose to change his vocational path. His decision required him to return to Bluffton for a fifth year that would include an internship that blossomed into a full-time job.

“It’s all about standing up for those who don’t have a voice,” he says of social work. “I fell in love with it, changed my major and the rest is history.”

As a new social work major, he needed 448 hours of field experience and was unable to find an internship close to his southwest Ohio home. Enter Heather Koontz, then an assistant professor of social work at Bluffton, who arranged an interview for Stabler with Coleman Behavioral Health in Lima, Ohio. That interview wound up netting him both an internship and a career.

“It was a really neat experience because Coleman offers so much. They offer a wide variety of services including mental health counseling, psychiatric services and drug and alcohol counseling,” he says of the nonprofit organization, which offers mental health services in seven counties in Ohio.

Stabler spent the first month of his internship observing different programs at the Lima facility, but for the last two months of the internship, he chose to specialize in crisis intervention counseling. He served as an operator for the HopeLine, a 24-hour phone service for individuals who need immediate counseling. He also was tasked with following up with clients who had received treatment to make sure they were feeling well or to refer them to an appropriate service based on their needs.

After just 10 weeks at Coleman, Stabler was hired part time as a crisis counselor. “I was very fortunate in that I was able to count my paid work hours as internship hours,” he says.

In April 2013, just a month before his Bluffton graduation, he was offered a position at Coleman as a full-time crisis counselor, on the condition that he obtain his licensure in social work. He did that shortly thereafter.

After serving for a year as a crisis counselor, Stabler transitioned into outpatient services, a position he still holds today. He conducts interviews with new patients and refers them to an appropriate service provider, such as a counselor or psychiatrist. He also continues to operate the HopeLine on occasion and sometimes practices crisis intervention for hospital emergency rooms.

The Clark County, Ohio, native anticipates attending graduate school someday to earn his master’s degree so he can teach social work. “As a professional social worker, I’m still passionate about education and being a teacher,” he says.

Some students may dread staying in school an extra year, but Stabler is satisfied with his choice. “I was definitely blessed and everything fell together. It was like it was meant to be,” he says. “I wouldn’t change it for anything.”