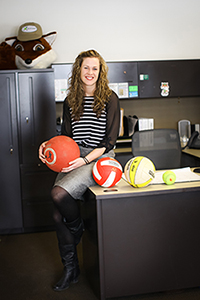 Bethany Behnfeldt’s summer 2013 internship not only allowed her to explore the field she loved, but it also let her live closer to her boyfriend. After graduating from Bluffton last year, she continued both relationships, with the parks and recreation department in Green, Ohio, as well as with her now-husband, Zack Lerch.

Wanting to enter the workforce prepared but also hoping for close proximity to Lerch, the recreation management major was looking for an internship in northeast Ohio two summers ago. Fortunately, she had the assistance of Tami Forbes, associate professor of recreation at Bluffton, who helped connect her with the parks superintendent in Green, in Summit County.

“She was there to guide me through the process of finding a good location, and she put in a good word for me,” says Behnfeldt in appreciation of Forbes. “Her professional connection really did help out,” the Napoleon, Ohio, native adds.

After talking with the superintendent and interviewing for an internship, Behnfeldt was all set for a paying experience in Green while living with her aunt and uncle in nearby North Canton.

As an intern for Green—population roughly 26,000—she had a variety of responsibilities, such as helping with adult sports programs and assisting the special events and program coordinator in setting up and tearing down for events.

She also helped with the city day camp program, in which children attended fun and educational sessions for a week at a time. Teaming with the recreation coordinator, she led five camps, including no-bake cooking, alternative sports, martial arts and arts and crafts.

Behnfeldt’s biggest task was coordinating an all-day event of her own creation for summer 2014. She planned a day of family fun that also commemorated the two-year anniversary of a park’s renovation. To ensure the event would go off without a hitch, she purchased the food, hired a band, created advertising and meticulously scheduled every game and activity for the day.

“It felt like it just came naturally,” she says of the internship. “All the hard work I was doing in the classroom with support from professors just really paid off when it came to the internship.”

After finishing her academic coursework in December 2013, Behnfeldt was immediately hired by Green as a part-time recreation assistant. She was later promoted to full-time recreation coordinator, the position she holds today. Behnfeldt plans to pursue a master’s degree someday, but for now, the newlywed couldn’t be happier with the career she started with an internship less than two years ago.