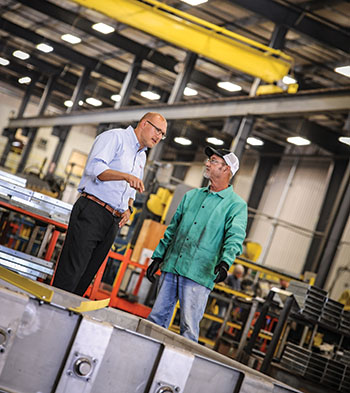 Darby Benroth describes Bluffton’s MBA program in a way that everyone can relate to.

“It helped me become confident and assertive in ways I’ve never been before,” explained Benroth, president of American Warming and Ventilating based in Holland, Ohio. “The program focuses on practical ways to learn and grow in business which ultimately impacts far more than your professional life.”

“There are some people who are natural-born leaders—who are confident right when they step into that role—and there are others, and I’m not afraid to say like me, for whom it didn’t come naturally and needed to develop that skillset,” explained Benroth.

After leaving Mestek for a short time, Benroth reconnected with its CEO during a casual call in which they discussed his MBA experiences. He was invited to interview for the position of executive vice president of American Warming and Ventilating, a Mestek company, and just two years after becoming a VP, Benroth took over as president.

Benroth’s leadership skills were quickly put to use as he climbed the corporate ladder.

“I realized we had a real issue when I came back. There was a toxic culture and that was one of the first things I wanted to work on. I started asking questions and having meetings to figure out what we had to do to get people engaged in the company,” said Benroth. “We first established a new mission and a vision statement and just put it in front of everybody. It was the foundation for every meeting, every strategy discussion and every decision. I knew that everyone had to buy into the vision before we could move forward. Once everybody rallied around the vision, things snowballed into the great team we have today.”

Now, he oversees about 150 employees in two facilities—an office in Holland, and a factory in Bradner, Ohio. The company manufactures everything from industrial life-safety products for subway systems to architectural green products such as solar shading for commercial applications.

“There’s no doubt that my experience at Bluffton is directly responsible for the position I hold today.”

And today Benroth’s family is reaping the rewards of his commitment to the program, but it was a challenge.

Benroth’s cohort started in the fall of 2010, the same year his oldest son was born, who was followed by a second boy in 2011. “There were a lot of very tired nights. It was taxing, but it was something I felt was important and my wife felt was important. I give a lot of credit to my wife because she took on a lot of the burden while working as well.”

Benroth believes the program even reshaped him as a person. “The fundamentals you learn change how you address all challenges in your life from home to work to community. It sounds cliché but you’re not the same person going out as you are going in. And I am beyond grateful for the opportunity.”