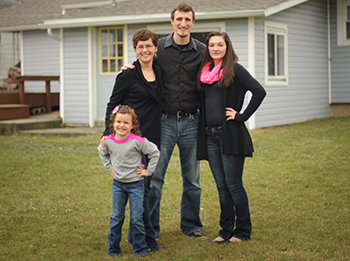 When they got married in 2008, Morris and her husband Courtnee ’06, originally decided not to have children.

“And, God has a different plan for you than you have for yourself,” said Morris. Two years later, Megan gave birth to their now five-year-old daughter, Siren.

“After we had her, I realized having a daughter was a wonderful thing. And once we decided that we were going to have a family, then we became interested the second time around in foster care. “

Fostering runs in the family. Courtnee’s parents are foster care providers and have adopted two children through foster care. Megan’s family unofficially fostered a teenager for two years, a boy, she now considers to be her brother.

The couple became licensed foster care providers through Allen County Children Services, and on March 11, 2015, a 13 year old girl was placed in their home. The group bonded, and on February, 29, MaKaighla’s adoption was finalized.

“Having a teenager in the house is very different. I never worked with children. We didn’t have a lot of young children in our family. Now, you throw a teenager in the mix! But, I can say that she is one of the most loving girls that I have ever met.”

Opening your home to a complete stranger can be daunting.  However, Morris says Bluffton broadened her view of the world and raised her awareness of the needs of others.

“They encourage you to do these cross-cultural trips.  You see things on these trips that change your perception of how blessed you are.  Whether consciously that had an effect on the adoption or subconsciously, it is something you learn during your time here,” said Morris.