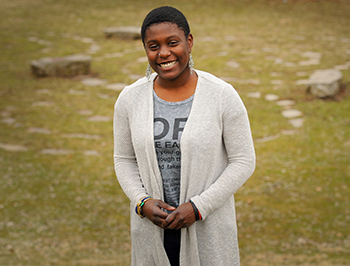 Faith, family and friends are the forces that fuel Bluffton University sophomore, Malika Thompson ‘18. A native of Cincinnati, Thompson is double majoring in business administration and Spanish. She is a hall chaplain and a student ambassador, who is also part of the multicultural student organization, PEACE Club, SERVE and gospel choir. That’s a lot of activities for one person, but she stays busy in an effort to make a difference in someone’s life, just as people have made a difference in her life.

“That’s what life is all about. You’re not supposed to live for yourself. You’re supposed to help other people,” said Thompson.

Thompson was first inspired by her mother, Rose Butler. Butler was hospitalized after a stroke when Thompson was nine. The single mom of four had to learn to walk and talk again. However, Thompson says she recovered quickly, and just a few months after the stroke Butler was granted custody and started raising her two young grandchildren.

“If I could be, not even half, like point two five percent of what my mom is, I would be happy-- just the love that she has for her kids, the faith that she has, the strength that she has,” said Thompson.

Every time Thompson returns home, leaving her mother is difficult. But Butler is a strong advocate of education, and Thompson is finding plenty of mentors at her second home.

On her first day on campus, Thompson met Julia Thomas ’15.

“We just clicked,” said Thompson. Thomas was a hall chaplain and encouraged, Thompson to follow in her footsteps.

“I think things happen for a reason. So, it wasn’t by chance that we were on the same floor at the same time.

“You can just tell he’s so full of God’s love and he wants to give it to everybody. That’s a blessing.”

Thompson says the aspect of Bluffton she enjoys the most, is being encouraged to view life from a different perspective.

“You grow a lot if you get the chance to come outside of your own situation and see the world through somebody else’s lens.”