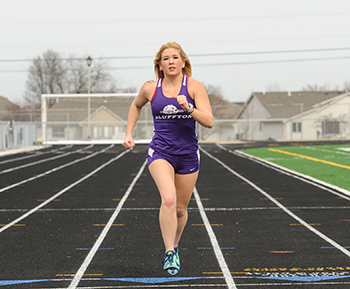 As part of their studies, students present research on a topic of importance to them. For Devony Miller ‘19, that topic was women in contact sports. It’s a subject in which she has direct experience.

“Female athletes are not always able to test their power and strength like men in contact sports. So, I went out for wrestling,” said Miller.

Miller was the only female member of the Liberty-Benton High School wrestling team in Findlay, Ohio.  At first, she was ostracized by her teammates.

“The hardest part wasn’t the physical contact against boys. It was the bullying and rejection of me by my teammates. They were embarrassed that I was on the team. Of all the conditioning, bruises and sweat, the hardest part about wrestling was feeling alone,” said Miller.

The brutal realities of gender inequality were even more evident during Miller’s first meet.  During her first match, she put up a good fight but lost. “The second time I won. Everyone went wild.”  But, “When I beat that boy, the coach was yelling at him, screaming at him. The boy was crying. The coach was saying awful things,” said Miller.

Miller had the opportunity to wrestle in college, but chose to focus on track and cross country at Bluffton while pursuing a degree in sports management and business. “The professors really care, the coaches really care.  I really like Bluffton a lot.”

Miller was selected to present her Becoming a Scholar project during the Celebrate the Library Week research fair.  The project is a website that outlines the stereotypes and sexualization of women in contact sports and features ways to support women who are interested in pursuing contact sports.  The project can be seen at www.contactsportsequality.weebly.com.