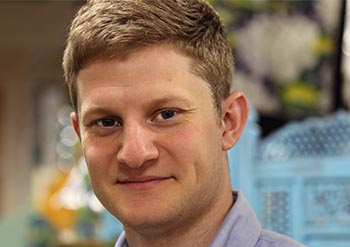 Over the last year, Cody Litwiller has been in the right place at the right time.

Since May 2012, he has advanced from new intern to coordinator of social media and online communications at the home office of Ten Thousand Villages, the nation's largest fair trade retailer.

After finishing his Bluffton bachelor's degree in marketing in May 2011, Litwiller worked for a year with his father and other relatives in an excavating business at home in Hopedale, Ill. Considering potential marketing-related options during that time, he called Dr. Karen Klassen Harder, one of his Bluffton business professors, to ask if she knew about any job possibilities at Ten Thousand Villages, which she serves as a board member.

Referred to human resources representatives, Litwiller called the Akron, Pa., home office and learned that the nonprofit's marketing department was looking for help with social media and communications. He landed an internship in May 2012, became a marketing assistant in September and, after the coordinator's position was created, made it through three rounds of interviews to assume his current duties last December.

Litwiller, who minored in economics at Bluffton, calls Ten Thousand Villages "a sweet spot for me" because it entails marketing and international economics "wrapped in one."

His employer, a partner of Mennonite Central Committee, is "a fair trade organization that sells handmade products from artisans around the world," Litwiller says. It buys directly from the artisans, paying them interest-free cash advances of up to 50 percent and the balance once the products are sold, he explains. In the United States, the products are available at roughly 75 Ten Thousand Villages stores in 30 states, on an e-commerce website and through many festival sales and alliance accounts.

Economic development and skill-building work are also part of the relationship with artisans, Litwiller notes, pointing out that the nonprofit operates in more than 35 nations in the poorest, most underserved parts of the world. The top five countries in which Ten Thousand Villages works, based on total purchases from artisans, are India, Pakistan, Peru, Bangladesh and Vietnam.

He is among more than 75 employees in the home office, where his work includes elements of public relations, advertising and graphic design. He likens a lot of the job to being "an internal reporter for the organization, trying to find relevant things we can share online with folks."

"Every business needs to explore some footprint in social media, like it or not," Litwiller says. "Almost everyone uses social media, so it's a touch point."

Because it's also still new, "there aren't any proven rulebooks at the moment," he says, noting the "huge task" of keeping up with constantly evolving applications. "It's the wild, wild west of marketing right now."

Litwiller settled on a marketing major after his first year at Bluffton, which he had chosen sight unseen as a small campus with Mennonite ties. He liked marketing's interplay with journalism and graphic design—interests from high school—and the science behind it, he says. "It can be a lot of things, and that's what's most appealing to me."

And when he graduated, he left with more than a diploma. Litwiller credits the university with "just opening up my world to seeing the options out there," and with exposing him to people from many different places.

"It's pointed me in the right direction so far," he adds. "Things have been lining up pretty well."