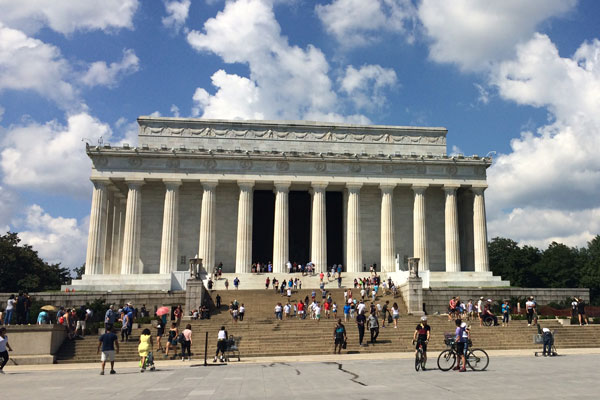 Celesta Hartman ’23, a psychology major from Lima, Ohio, interned with the Charles Sumner School Museum and Archives to stage an exhibit. The school, established in 1872, was one of the earliest schools for African Americans in D.C.

“I chose to study in D.C. in hopes of becoming closer to achieving my dream career—working at the Library of Congress,” said Hartman. “On top of the numerous connections I made, I also learned about how the need for public input and use dictates how well a place operates.”

Jake Kiger ’22, a psychology and criminal justice double major from Columbus, Ohio, interned at the Public Defender Service for the District of Columbia, where his duties ranged from filing paperwork to interviewing possible witnesses of crime.

Justine Lesniewski ’23, a psychology and criminal justice double major from Mantua, Ohio, worked with the Hyattsville Policedepartment to develop a Crisis Intervention Team and the Greenbelt Police Department on opening lines of communication within the community.

Noah Robinson III ’23, a psychology and criminal justice major from Urbana, Ohio, served with Voices for a Second Chance. VSC supports incarcerated and newly-released individuals in their transition back to the community.

WCSC is a program run by Eastern Mennonite University which is also open to Bluffton University students. Participants lived in a house with the 10 other WCSC students in the working-class neighborhood of Brookland. They shared meals, split household responsibilities and took weekly classes together.

“I enjoyed my time in D.C. and made lasting friendships,” said Poiry. “I definitely have stories that I will keep with me.”