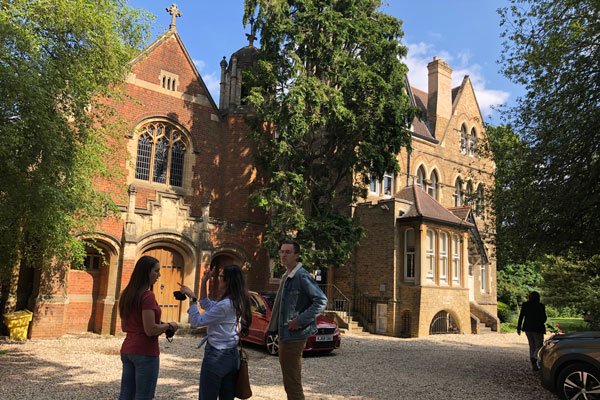 More information about the England cross-cultural.

As a child, Olivia Hattery’s family read C.S. Lewis’ “The Chronicles of Narnia” together. By the time she was eight, they moved on to “Mere Christianity.” So, when Hattery had the chance to live and learn in the place where Lewis studied and taught, she relished the opportunity. A 2022 art and writing graduate from Kenton, Ohio, Hattery spent summer 2021 in Oxford, England, with Scholarship and Christianity in Oxford (SCIO).

“Lewis is obviously a big deal in my life. He used logic, reasoning and argumentation to make very good points, but he also used fiction and fantasy,” said Hattery. “I want to do the same thing, so this was the best excuse ever to learn about how he did that.”

In partnership with the University of Oxford’s Wycliffe Hall, SCIO provides high-level academic teaching in a setting which seeks to deepen and strengthen faith and Christian understanding of the world. Hattery took two classes on Lewis’ literature.

“I’m homeschooled, so I had a classical education growing up where we focused on writing papers and explaining what we learned over tests,” she explained. “At class in Oxford, we used the Socratic method and thesis arguments with our professors.”

In her free time, she traveled. In London, she took in a performance of Agatha Christie’s “The Mousetrap,” the longest running show on London’s West End and visited the British Museum where she saw the longest surviving manuscript (saved by monks from a fire) of “Sir Gawain and the Green Knight.” She also toured Edinburgh Castle in Scotland solo and visited Hampton Court Palace with the other 11 participants to learn about Henry VIII.

“I lived out my dreams—dreams I worked really hard for. I’m from a small town, and sometimes things seem impossible. Now I know dreams that seem impossible might actually come true.”

Encouraged by the experience, Hattery applied to graduate school at Oxford University. While she didn’t get in, Hattery plans to apply again.