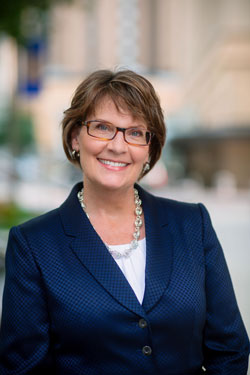 Never in her wildest dreams did Johanna (Dickey) Rian imagine she would end up working in the medical field.

But the sum of her experiences led Rian to a 14-year-long career, which she just retired from in March 2022, as program director of the Mayo Clinic Lavins Center for Humanities in Medicine.

The daughter of longtime speech faculty member, Dale Dickey, a 16-year-old Rian accompanied her father and Bluffton students on a January tour of London.

“I loved it,” said Rian. “I wanted to do anything that allowed me to get back there.”

As a Bluffton student, she spent the fall semester of her junior year studying theatre at the University of London Goldsmiths College, leading to her second major.

“I was able to persuade the faculty that by studying abroad and doing summer theatre at Bowling Green I would have enough coursework for a self-designed major in theatre.”

Following graduation, Rian moved to Atlanta, and foreshadowing her future career, worked at the Georgia Hospital Association before becoming a flight attendant to continue her travels.

A choice: literature or theatre?

When deciding between her loves of literature and theatre for graduate studies, Rian took the advice of the late Mary Ann Sullivan, professor of English, who asked if Rian wanted to be an active or passive participant as an educator.

“She helped me understand that, for me, theatre could be a more creative and expressive pursuit,” said Rian.

A master’s degree at the University of Michigan and a Ph.D. from Stanford University in Theatre and Humanities were followed by a move to Minnesota where Rian took a faculty position at Gustavus Adolphus College. Positions at an arts education non-profit and in hospital fundraising followed.

An opportunity with the Mayo Clinic

Finally, a position in medical humanities, a field she had never heard of, caught her attention.

“At that time, it was still an evolving field,” said Rian. “There weren’t many programs in medical humanities in institutions across the country.”

In 2008, Rian took over a small medical humanities program at Mayo and began to expand it, introducing curriculum for medical students and residents, private sessions with professional artists for patients, and professional development for staff on topics such as narrative medicine
and medical improvisation.

“Many people begin an improv workshop feeling nervous and skeptical but end realizing that it has been both fun and practical in terms of takeaway communications skills,” said Rian.

Within Mayo’s medical school, Rian taught courses such as The Human Element, an introduction to medical humanities, and Telling the Patient’s Story, a theatre course that helps doctors better capture and share a patient’s case history. Students are now able to earn a humanities distinction on their diploma, and Rian initiated the development of a professional certificate program in medical humanities. She also helped secure a multi-million dollar endowment for the Lavins Center, ensuring that its work supporting patients, staff and students will continue.

Benefits of medical humanities programs are wide-ranging, as demonstrated by the rapid growth of the field in the U.S. in the past decade. Programs geared toward health professionals “help care providers deepen the understanding of the human condition,” while programs for patients “enhance science-based medical treatment.” Ultimately, all Lavins Center programs follow Mayo’s vision of medical care that “the needs of the patients come first.”

While Rian certainly didn’t expect to work in health care, her endless efforts at the Mayo Clinic follow a pattern developed during her college years.

“At Bluffton, I was encouraged to pursue my interests. That experience instilled an optimism that my choices would bring something rewarding to me but also beneficial to others.”