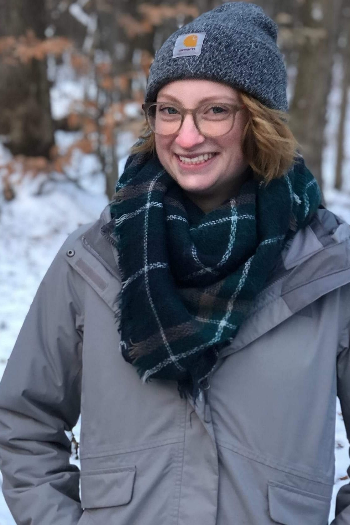 Alexia Kemerling is a writer, runner and activist from the heart of Ohio. She wears hearing aids in both ears and is somewhat decent at lip reading. She is currently pursuing a bachelor’s degree in creative writing at Hiram College. Her work has appeared in TIMBER Journal and Mud Season Review.

Every summer,
I measure the dwindling length of the island, with
worried footprints in damp sand, count
turtle nests garnished with yellow caution tape, see
the shadow of my grandmother’s ghost in every tide pool.

The first time,
we discovered the shrinking it seemed, impossible
to tame the sea, but I knew that wouldn’t stop us, from
piling sandbags into mountains of denial at the island’s edge, meanwhile
we watched with helpless grief as my grandmother’s mind faded as, fast
as the pelican’s sharp dive, beak first into the water, nothing
to do but clasp her shaking hand careful not to tear her tissue paper, skin
keep a calm smile on the surface of my face despite the, unavoidable
emptiness in her eyes when I whisper her name with love.

Years later,
I still remember her surprise, then unease, every
time the distance, from her to ocean, grew
smaller and smaller as the tide erased the shoreline. Maybe it had, always
been this way saltwater, licking
her toes, engulfing her chair, leaving
behind rings of rust that at first seemed harmless, enough
but erosion is a slow violence.

In the midst of it all,
I slowed my steps, refused to acknowledge that my walk was getting, shorter
each summer as the waves crept over the sandbags and I, hesitate
to admit I closed my eyes as rapacious waves, swallowed
first street, second street, six blocks, two homes, I
never said goodbye to the sunrise or, expressed
my love for the smell of her banana sunscreen, I
never kissed her brain, for fear of smudging, any
fragile memory. I never longed for land until it was too late.