i always sit after my shower in my damp towel on my bed until it feels like hours and my hair is mostly dry.

(file under: things that make sense)

i have a bookshelf on top of which i put only books that i think look aesthetically pleasing. don’t worry, i’ve read them all. i just don’t organize them alphabetically like the rest of their kin.

i bite my nails but only on certain fingers and i don’t know why as having uneven fingernails causes more anxiety than the thing that caused me to bite my nails in the first place.

i once jammed four fingers side by side in my mouth to prove to my ex-boyfriend that my mouth was bigger than his best friend’s for no apparent reason other than my superiority complex and my need to continue to fill a niche in his life which i guess included having a larger mouth size than his best friend.

(file under: things that frankly don’t make sense at all) 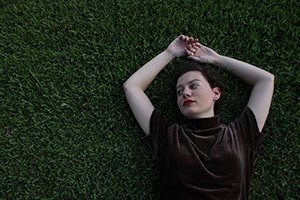 Abbie Hart is a sixteen year old poet from Texas. Her work has been seen in five publications, and is forthcoming in many more. She enjoys tech theatre and photography, and is an IB and AP student.