An Emphasis on Emotional Intelligence

What attributes lead to a successful career? Is raw intelligence key or are relational skills such as empathy more important in the workplace? These are questions Dr. George Lehman, professor emeritus of business, often pondered with students enrolled in leadership courses through Bluffton’s MBA program. They’re questions Lehman originally explored as a student at Case Western Reserve University, and they’re questions Lehman is still exploring at Bluffton as he takes on a new role focused on emotional intelligence. 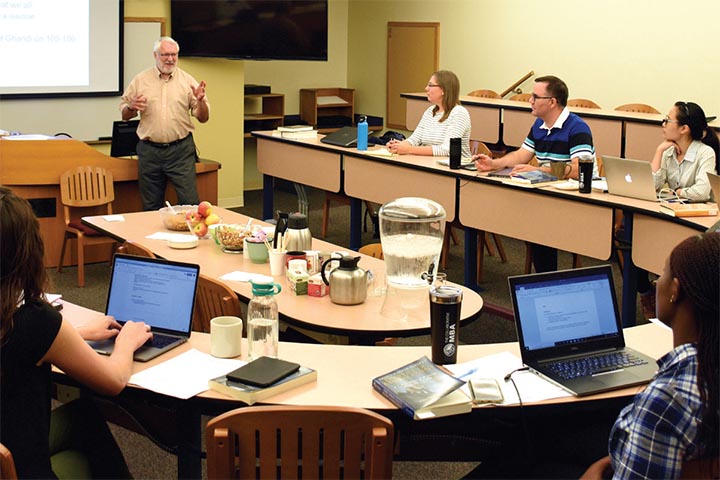 “You have to have enough raw intelligence to know what you are doing in your career,”  explained Lehman, “but people who are very good at their jobs often have skills that
don’t show up on IQ tests.”

Instead, Lehman looks to the growing research of emotional intelligence as a key success factor for leaders. Often abbreviated to EI or EQ, emotional intelligence is a cornerstone of the leadership courses taken by adult and graduate students at Bluffton. While IQ is relatively
fixed, measured by tests and quantified through a numeric score, EQ is flexible and can be improved, but is not easily measured or defined by a fixed score.

“EQ was developed in the 1980s as an alternative to IQ and people are really intrigued by it,” said Lehman. “People often want to take a test to see how good they are at it, but emotional intelligence should not be about how well you do on a particular EQ test. Instead, the focus should be on what you learn about yourself.”

Lehman was approved to administer and interpret the Emotional and Social Competence Inventory and incorporated the concepts into Bluffton’s coursework in 2015.

There are four parts to a basic EQ structure: self-awareness, social awareness, self-management and relationship management. Or in Lehman’s words, “understanding your emotions and the emotions of others so you can manage yourself and others effectively.”

While all four “quadrants” work together, according to Lehman, the key is self-awareness.

Roughly 40 years ago, emotional intelligence began gaining traction and acceptance through the research and publications of psychologists Peter Salovey, now the President of Yale University, and John D. Mayer. However, the concept of self-awareness is certainly much older. The phrase “Know Thyself” is inscribed on the Greek Temple of Apollo at Delphi and  Benjamin Franklin wrote in the 1750 Poor Richard’s Almanac, “There are three things extremely hard, steel, a diamond and to know one’s self.”

To improve self-awareness in the workplace, Lehman suggests spending time thinking about what you really want from your career.

“People have very different needs from the workplace. For some, it’s financial stability,” explained Lehman. “For others, it’s also about companionship, achievement or mental
stimulation. There are many reasons people work, and when we get riled up at work, it’s likely one of those needs is not being met.”

Now retired from regular teaching, Lehman is sharing his knowledge of emotional intelligence with several new audiences. This spring, he began providing a series of small-group workshops for Bluffton’s faculty and staff. Each training includes an initial seminar to introduce the concepts followed by additional sessions of reflection.

“EQ is something you need to chew on for a little bit. You can’t just say, ‘ok, I got this,’” said Lehman. “Part of your growth is reflecting on what you’re learning.”

Lehman started with the admissions and business offices but will eventually reach every  department on campus. The goal is to help faculty and staff better relate to each other
and to students.

Still in its early stages, the university is also working to develop a certification program or a collection of courses with a strong EQ component. A strategic plan initiative, the goal is for the certification to be available to undergraduate students as well as adult students.

“Helping people understand emotional intelligence, including our students and our partners, will strengthen the businesses and organizations who hire our graduates,” said Lehman.