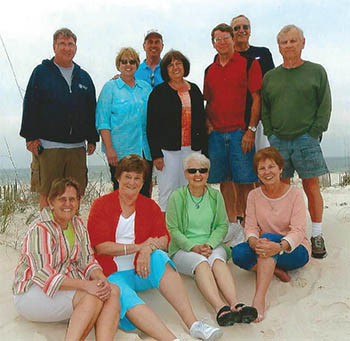 For nearly 50 years, a group of couples (mostly from the class of ’68) have gotten together every summer. Over the years, the alumni have become a support group for each other as they’ve raised children, moved through careers, experienced serious illness and death, and dealt with other life issues. Their story exemplifies how the Bluffton experience is not only about preparing students for careers, but also for forming life-long relationships.

For many, the friendships made in college are some of the strongest of their lives. But after graduation people move, they start families and friendships can easily dissolve because of time and distance. However, for one group of alumni, their friendships, instead, grew and evolved.

“When we all started getting together, we all had young children. So, a lot of the conversation revolved around the kids, and then it revolved around our jobs. Now that we’re all retired, it’s more about grandchildren and health than anything else,” said Roberta Hedrick. “We all started laughing one time because we realized we were all talking about the medicines we were on for different ailments.”

Their friendships developed at Bluffton in 1964 at a very different time in their lives. Several of the guys lived together on the fourth floor of Lincoln Hall, while many of the ladies bonded by living together in Eaton House on College Avenue. Three of the guys, Vern Swartley, Jim Bleam and Bob Hedrick were from Eastern Pennsylvania.

“When we were freshmen, a bunch of us Mennonite girls sort of became attracted to the Pennsylvania Mennonite boys. We kind of passed the guys around, but we all ended up with the right one,” Diane Bleam joked. The seven couples all found their spouses at Bluffton.

Upon graduation, the friends parted ways. Some went into voluntary service, others began their professions. However, the Bleams, the Swartleys and the Hedricks reunited a few years after graduation because of their Eastern Pennsylvania connection. The reunions turned into annual, weekend camping trips. At their 15th class reunion, the three couples brought up the trips to the four other couples, the Beitlers, the Lautzenheisers, the Derstines and the Lehmans, who joined in.

“I believe the first time we all got together was at Cook Forest in the middle of Pennsylvania,” said Bob Hedrick. “We just had a really good time, and from that year on we started getting together every year.”

After that, the families began blocking out the first week in August for the Bluffton Gang Adventures.

The adventures have taken the couples and their families all over Ohio, Pennsylvania and Indiana, and in the last few years, even to Gulf Shores, Ala. Each year, one couple serves as the host and plans events for the weekend.

“There are so many different things that we’ve done, so many creative and fun things. One year in Berne, our hosts, the Lautzenheisers, rounded up bikes for everyone, and we did a Tour de Berne,” said Nancy Swartley. “I had a Victorian tea for the women one time, and I rounded up old bridesmaid dresses and everyone had to dress for the tea. Then the men didn’t think it was fair that the women got the tea party so the next time I hosted, I held a macho tea party.”

While the activities range from creative to outlandish, the couples say the trips are more about the people than the place, and there have been real struggles for each family. Dale Derstine passed away in 1994 from a heart attack, and Vern Swartley died in 2001 from cancer. Four members are cancer survivors, and many have faced other family and health challenges, but the bonds of friendship continue.

“We’ve been through all of the life stages together: having small children and seeing the kids grow. Now, we are all either empty nesters or part of the sandwich generation where we are babysitting grandkids and taking care of elderly parents,” said Jim Bleam. “We’ve run the gamut of life experiences with one another.”

The next adventure will take the group to Berne, Ind. Ted and Hazel Lautzenheiser are hosting and are in possession of a traveling Beaver stuffed animal that is ceremoniously passed on to the next year’s host/hostess.

The seven families have grown to include 17 children and 42 grandchildren. The goal is to someday get the extended families all together. It’s a nearly impossible task, but keeping these friendships for so long has also been an impressive accomplishment.

“It’s really, when you get right down to it, pretty amazing,” said Bob Hedrick.