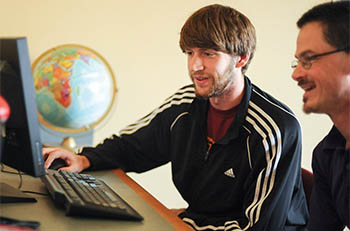 Inspiration in the classroom 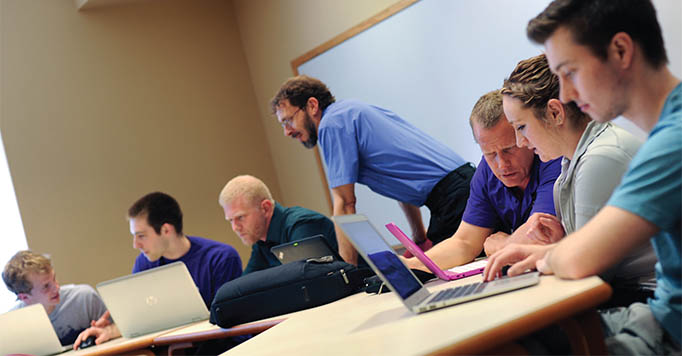 Bluffton has a student faculty ratio of 12:1. That number allows for many one on one interactions, but for the spring 2016 data analytics class the ratio was 7:7. That’s right. Seven professors for seven students.

“Data analytics is a field that is getting a lot more attention than it has ever before across a wide variety of disciplines,” said Dr. Ross Kauffman, assistant professor of public health. “So, it’s used in everything from athletics to politics to natural and applied sciences. What we’re trying to do in this class is give students the opportunity to delve more deeply into this topic.”

Over the last few years, Dr. Stephen Harnish and Dr. Darryl Nester, professors of mathematics, have discussed introducing a data analytics course or program on campus. The process sped up after Tyler Oberly, a Bluffton native and the manager of analytics for the Tampa Bay Buccaneers, spoke on campus, and the timing seemed right.

“This year we had a critical mass of students that could handle the material with their skills and talents,” said Nester. Harnish and Nester started asking fellow professors if they would be interested in developing a course. Five additional professors agreed to teach sections of the course that relate to their fields of expertise including Dr. Don Hooley, professor of math; Dr. Will Slater, professor of psychology; Dr. Jonathan Andreas, associate professor of economics; Dr. Rudi Kauffman, associate professor of restorative justice and Dr. Ross Kauffman. Each professor taught at least one week during the semester, some taught a few and others came to multiple classes just to learn more from the students and their peers.

“Essentially the faculty involved donated their time to take part in a course simply because they’re fascinated by the topic, and they wanted an opportunity to engage with students in this way,” said Ross Kauffman. “That’s a unique thing around Bluffton. We all just kind of put in a week here or a week there as it worked into our schedules.”

Because the course is experimental, students are taking it as credit/no credit. They too come from a wide variety of majors. Autumn Erb, a freshman from Findlay, Ohio, is interested in criminal justice and social work. For her final presentation, she’s analyzing the socio-economic data of teen moms.

“When everybody thinks of teenage pregnancy, they automatically think the mom didn’t do well in school or wasn’t active in high school, but my best friend was valedictorian and had a full-ride scholarship, and she was pregnant in high school,” said Erb.

“I downloaded all of the seven letter words you can actually play in Scrabble based on the limitations of the tiles in the game and then calculated the maximum number of points you can get when you lay them out on the board to determine the  maximum possible first move,” said Hunsberger.

Both students say there are positives to the team teaching approach to the class. “I like it a lot,” said Erb. “It makes it a lot easier to follow this challenging material because there’s one on one learning.”

“It’s also cool because one professor will be an expert in one area and sometimes another professor will be listening and they’ll ask questions, and you kind of feel like you are learning together,” said Hunsberger.

Harnish says that style was intentional.

“We wanted it to be like a playground, like a group of people working in a sandbox together, each using our knowledge and experience to shape the development of the class while working with students who are intrigued by the topic,” said Harnish.