The next Alumni and Friends Tour destination is Ireland and Scotland. Planning is in its early stages. If you are interested in receiving information when available, please email Julia Szabo, senior development officer, at szaboj@bluffton.edu

Stay tuned for updates in the Alumni enewsletter and other publications!

From May 12-23, 2022, a group of Bluffton University alumni and friends took part in a tour of the Rhine River with a focus on Mennonite migrations in Europe. Dr. Gerald Mast, professor of communication, served as the group leader. 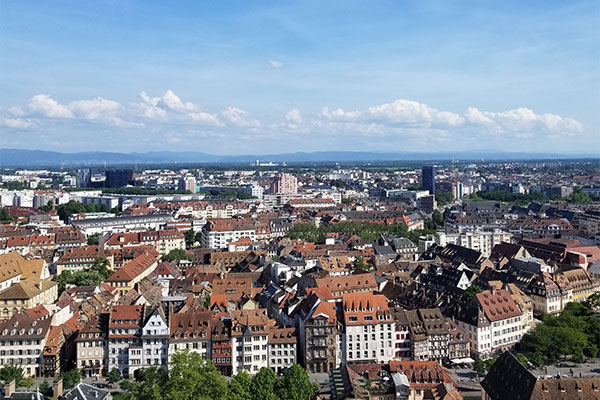 The 18 participants visited the cities and rural communities where ancestors of Bluffton’s founding faith community once lived. They reflected on the challenges associated with leaving home as well as the creativity unleashed by migration experiences. Bluffton’s Mennonite faith heritage has been profoundly shaped by the experiences of migration—of fleeing from one country to another in search of religious freedom and wellbeing. But the Mennonite churches and communities visited in Europe also showcased the legacy left by those who stayed—who found ways to maintain Anabaptist convictions even as they remained deeply committed to a specific place and to neighbors who may not have shared their beliefs. This recent journey was a reminder of the many different choices of faith and life made throughout the centuries by ancestors whose story may become our own—as we choose to continue it with our own creativity and courage, in response to the challenges of our time and place. 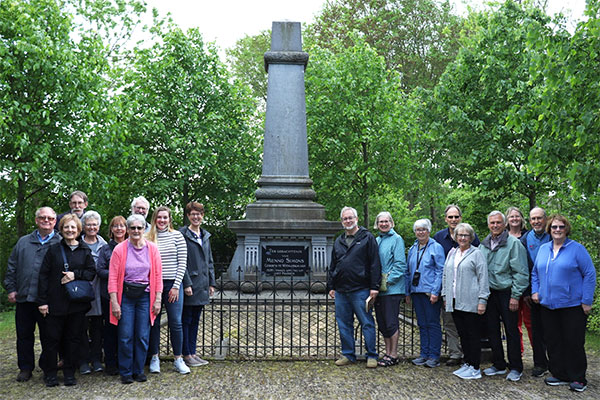 As the youngest traveler on Bluffton’s tour, Olivia Tennefoss ’21, a student support assistant at Delaware Technical Community College, described the experience as her “last Bluffton class” with her advisor, Dr. Gerald Mast.

From Zollikon, where new converts formed the first Anabaptist congregation, to Witmarsum, the birthplace of Menno Simons, Tennefoss, along with her fellow travelers, experienced “essentially where our faith was born.”

“This whole trip was a true explanation of the people and places I grew up learning about as a Mennonite,”  said Tennefoss. “Seeing the mountains and the terrain our ancestors crossed helped me better understand the lengths people went to for their beliefs.”

The experience was similar to trips the late Dr. Delbert Gratz, head librarian and professor of history, led from the 1970s through the 1990s. However, instead of specializing in the homesteads and genealogies of trip participants, Mast focused on a broader, historical picture of Mennonite migration as the group traced a piece of Bluffton’s history together. 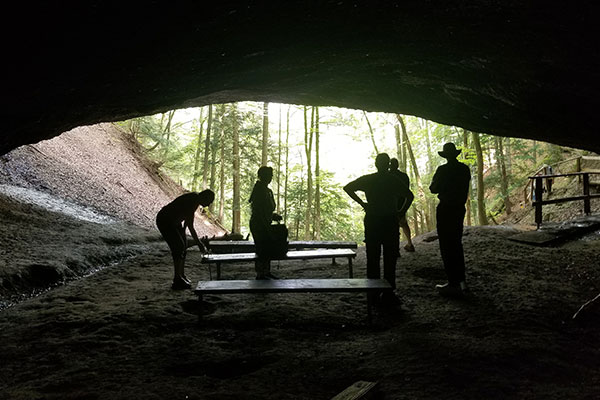 During the experience, participants walked up steep, uneven paths to sing together in Anabaptist Cave, where Swiss Anabaptists worshipped in secret, and traveled by boat down portions of the Rhine River, passing the same ancient castles Anabaptist migrants passed on their way north to more tolerant communities.

“We followed the path that a lot of Anabaptist migrants took,” said Mast. “The question was, ‘do I stay in my community and try to work out a compromise or hide my practices so I don’t get into trouble, or do I leave and find a place with more tolerance?’”

In many cases, explained Mast, the migrants had little choice. Special police forces were formed to specifically hunt down and imprison Anabaptists. Further illustrating this point, the group toured the house of Hans Haslibacher, the last Anabaptist martyr in Bern, and Trachsewald Castle, where Anabaptists were regularly imprisoned.

During the Reformation, European communities largely remained Catholic or became Protestant and, today, many of those same communities are still closely tied to the church at the center of their town.

“The tallest point in town is the church spire. It’s on the only church in town, and it’s the only religion of the town,” explained Mast, who contrasted the scene to the Village of Bluffton’s many congregations and church steeples. “The church is the unifying point of the town, so for Anabaptists to have another congregation on the side that meets in a house or a barn is a challenge to the community.” 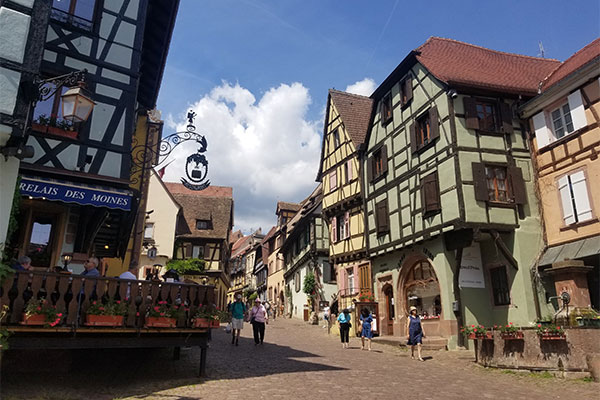 At Trachsewald Castle, Tennefoss found her mother’s maiden name on a map outlining the locations of suspected Anabaptists. The map is part of an exhibit called “Paths to Freedom” which was developed by the Swiss Mennonite Conference.

Tennefoss’ grandfather grew up in Switzerland, and eventually immigrated to the United States because of compulsory military service.

“His story was like a more contemporary version of the story we were learning about. He too left this beautiful place for his beliefs,” she explained.

Other experiences included worshiping in Langnau, Switzerland, with the oldest continuously existing Mennonite church; touring the medieval town of Riquewihr; and visiting the Unterlinden Museum in Colmar, France, and the Rijksmuseum in Amsterdam, to name a few.

“It was like holding an academic seminar in a field, or a cathedral or a museum,” said Mast. “We shared research and notes. Some of our participants had been on the previous tours with Delbert Gratz, and I learned as much from the people on the tour as the information I provided. It was great.”