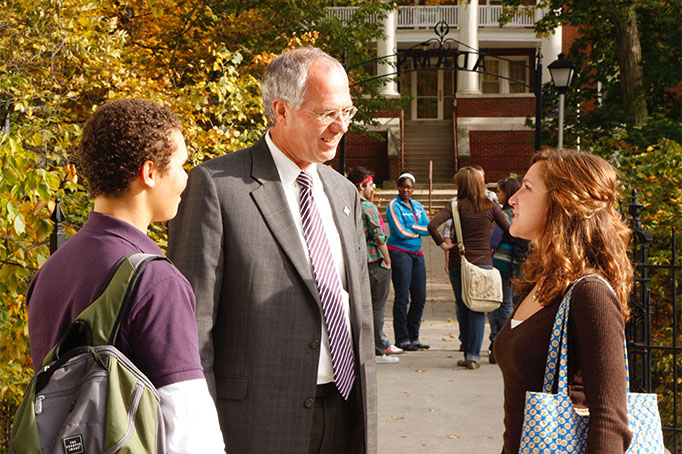 In Bluffton’s more than 100 year history, just nine people have served the campus community as president. That longevity means under their leadership, they’ve had the perspective to truly see change occur. This has certainly been the experience of Dr. James M. Harder, who also shared that the most rewarding part of the job has been the privilege of simply working on Bluffton’s campus.

“I get to witness the energy and creativity of students on a near daily basis, watch lives be transformed and horizons expanded, and observe lifelong relationships being formed,” said Dr. Harder.

He’s also witnessed the aspects of Bluffton that have endured the test of time. When asked to summarize his presidency, Dr. Harder paid tribute to long-serving dean of students, Dr. Don Schweingruber.

“At Bluffton, it truly is, and always has been, all about the relationships.”

Dr. Harder has routinely leaned on those relationships over the past 12 years, including the support of Dr. Karen Klassen Harder, his wife and professor of business.

“I’m a collaborator by nature, and I have benefitted greatly from the willingness of so many different individuals—on the board, on the faculty and staff, within our alumni community and elsewhere—to offer helpful suggestions and support along the way. But above all, Karen has always been actively engaged in the work that I’ve done as president—especially her ability to support a culture of hospitality and welcome at Bluffton. I can’t imagine the president’s role without her at my side.”

While the hardest part of the job has been trying to fit everything in (“I haven’t been able to invent the 30-hour day or 60-week year,” he joked), he’s also experienced the delightfully unexpected.

“I’ve been surprised by the frequency with which, as I’m out and about, people recognize me and identify themselves proudly as having a connection to Bluffton,” said Dr. Harder. “This has happened at many events and meetings of other types and organizations where I least expect it, while on personal vacations far off the beaten path, and even internationally. Bluffton’s 15,000 living alumni seem to pop up everywhere!”