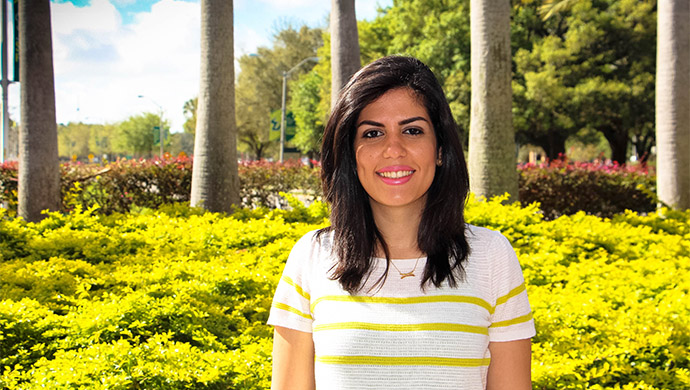 “I have never met such nice people. They taught me a lot about peace and nonviolence and how to give without expecting anything in return,” said Aldoori while holding back tears. “I really miss it.”

Coming to America
Aldoori came to Bluffton 10 years ago through the Iraqi Student Project, a grassroots organization with the mission to help Iraqi refugees whose education was disrupted by the 2003 invasion of Iraq. The organization now serves Syrian refugees as well. Aldoori was Bluffton’s first student through the program, but two others, 2014 graduate Tamara Al-Sammarraie and current student Lorca Ali ’20, have also taken part.

At Bluffton, Aldoori says she came to understand and appreciate the differences of others, found a supportive community, and established the morals and values that guide her in her life and career today.

Aldoori’s family left war-torn Iraq after she graduated from high school in 2006. Living as a refugee in Syria, she was grateful to learn about a program that connected Iraqi students with universities and community supporters in the United States willing to provide a free education and financial assistance.

Even with a local host family, mentors from First Mennonite Church, and attentive faculty and staff, the transition was difficult.
“It was my first time away from my family and I just wasn’t doing very well in my classes at first, and I missed speaking to people in the language I used to speak,” explained Aldoori.

Finding her calling
However, she persisted through the challenges. Aldoori became involved in student organizations, worked in the Center for Career and Vocation and interned in the international services office at Ohio Northern University. These experiences led her to pursue a future in higher education. In 2016, she earned a master’s degree in college student personnel from Bowling Green State University.

“Education became such an important part of my life because I was not able to access it easily. I had to go to another country and not see my family for four years because of visa issues,” said Aldoori, who still hasn’t seen her father since coming to the United States. “It’s challenging, but I want my family to be proud of me.”

“I really enjoy it,” said Aldoori. “I like being on a campus and working with students and meeting them.”

Keeping connected
Though she is five years past earning her bachelor’s degree and thousands of miles from Bluffton, the lessons imparted remain. Aldoori cites her senior capstone class, taught by Dr. Paul Neufeld Weaver, as instrumental in shaping her ethical behaviors and values and determining how to use them at work and with her local and global community.

“I learned to understand and appreciate the differences of others and to be aware of what others are going through,” said Aldoori. “Yes, I came from a war zone, but there are other people out there who have different struggles that we might not know about.”

Bluffton’s enduring value of service also made an imprint. She, along with colleagues at USF, started an annual service trip for orientation leaders to Give Kids the World, a nonprofit resort in Orlando that provides weeklong, cost-free vacations to children with critical illnesses and their families. She’s also assisted an Iraqi refugee family with adapting to life in the United States.

“The people and faculty were so understanding and they were so interested in learning about my culture,” said Aldoori.

She remains in contact with many Bluffton community members and recently returned to celebrate a high school graduation with the family of Randy and Kimberly (Yant ’97) Spallinger, who opened their home to her during breaks and summers.

Aldoori’s story shows you can leave your home—whether it was your home for 18 years or four years— but home never leaves you.

“I hold a special place in my heart for Bluffton.”