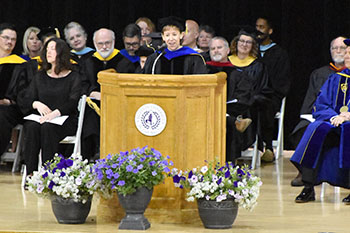 What drew you to the field of psychology?
I was a 4-H member for ten years, and as a teenager, I helped lead sewing and cooking classes for younger members. I noticed that girls as young as 9 years old were concerned about weight and body shape, and this was both surprising and sad to me. Later, I completed training to volunteer as a peer counselor at my high school. By the time I got to college, I knew that I wanted to provide therapy to people struggling with eating disorders. Prior to working at Bluffton, I was the coordinator for an eating disorders treatment team at a university counseling center, which was challenging but rewarding work.

What new interests are you pursuing?
I was awarded a BURC (Bluffton University Research Center) grant this summer to study the current controversy around trigger warnings. A trigger warning is an alert to students that they will be reading, hearing and discussing topics that might be emotionally challenging, such as sexual assault or suicide. Some scholars criticize trigger warnings as impinging on free speech, and their use has become a divisive issue. But, as a clinical psychologist, it makes sense to me to give students a “heads-up” to help them mentally prepare before engaging with material to which they might have a personal connection.

Share a memorable moment in your life that shaped who you are today.
I don’t know that there’s one moment, but the four years I spent at my alma mater, Lycoming College, were very influential. Several professors, both in and out of my major, impacted the person I’ve become. The professor who advised my honors project helped prepare me for graduate school and is still a mentor for me today. That same professor gave me advice that I now use with my advisees: when I was a senior, I was looking for electives, and I asked if there were additional psychology classes I should take, but he advised me to take courses outside my major instead. He cautioned that grad school is narrowly focused and that I should study other areas while I had the chance. So, that year, I took courses in sociology, genetics and history and found that I really enjoyed them.