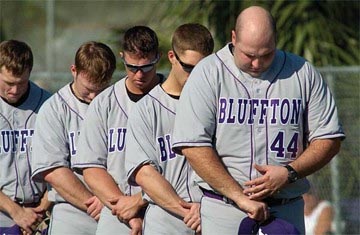 One year later, on March 2, 2008, the Bluffton Beavers played the opening game they were unable to play in 2007, competing against Eastern Mennonite University on Sarasota Christian High School's baseball diamond in Sarasota, Fla.

"These two teams of fine student-athletes and coaches share a common history," said Bluffton University president Dr. James M. Harder during his pre-game comments. "They were to play each other on this same field one year ago today. But the game never occurred due to the Bluffton team's bus accident early that morning. Now, exactly one year later, this first game of Bluffton's 2008 season is a game full of hope and new beginnings."

The nine-inning game between the Beavers and the Royals ended in a 4-3 victory for the Royals, and was followed by a Bluffton-sponsored picnic dinner for members of the two teams, their parents, alumni and friends — more than 200 in all.

"In so many ways, this game has deep meaning and significance," said Harder. "It's a game played in the presence of many parents, friends, alumni and well-wishers who have come to show their support. It's also a game played in the memory of five from the Bluffton team — Zachary Arend, David Betts, Scott Harmon, Cody Holp and Tyler Williams — whom we will always hold close to our hearts."

The Beavers continued to Fort Myers, Fla., for the remainder of the spring-break week, where they participated in the Gene Cusic Classic. "We spent our week in Florida doing what we went down there to do: play baseball," said Bluffton head coach James Grandey. "We knew going down that we'd have a lot of emotions, but that was to be expected. The players were focused on doing what they could, and at that moment, focusing meant playing baseball."