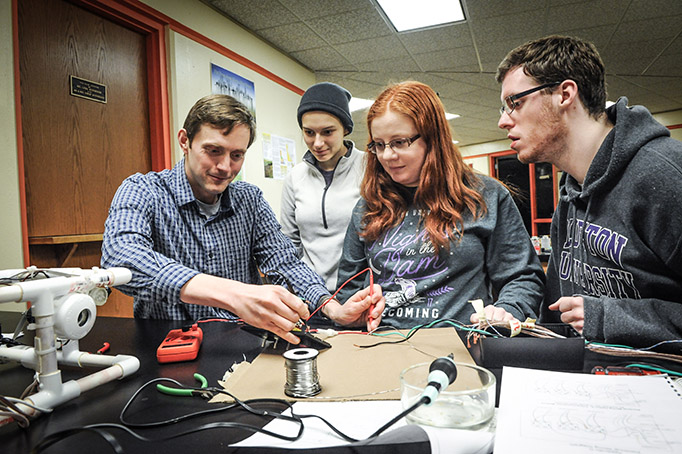 In Shoker Science Center, chemistry, biology and physics students use scientific instruments and equipment routinely. There is a lot of scientific analysis taking place, but, for lack of better words, there is not a lot of stuff being made.

Dr. Luke Myers, assistant professor of physics, is on a mission to change that starting with the construction of a Remotely Operated Vehicle (ROV) and continuing with a newly developed pre-engineering major.

Myers is one of the advisors of the Science Club, which is currently constructing the ROV.

“For our Science Club students, it allows them to get experience building something,” said Myers.

“Most often in labs, they are given equipment and are just told to use it. Now, we get to make something—solder, put together connections, read diagrams, all of that.”

Bluffton’s ROV has a camera and light and will have the ability to be driven underwater. Students will be able to use it to obtain video below surface and collect data.

“For the physics majors and students who are interested in engineering, they’re excited about the construction, but the biology and ecology students are thinking ahead,” Myers explained. “Once the ROV is finished, they want to know ‘What can we do? Can we measure pH levels? How about temperature?’ We plan to take it to the nature preserve pond and see what’s happening in there.”

Many of the students who participated in the construction of the ROV were part of Myers’ Linear Electronics class.

“They got the initial frame constructed and started the electrical connections. The wiring for the controls was a really good project for them to do,” explained Myers. “They learned how some of the stuff we learned about in books can be put to use.”

Amy Hall, a junior physics major from Piqua, Ohio, took the class and continues to work on the ROV as a member of the Science Club.

“It’s been a lot of fun collaborating with everyone,” said Hall. “I liked how we took turns building it. Everyone had different parts of the construction they liked. Some wanted to weld, some wanted to do the wiring part. It was cool seeing everyone come together to bring the ROV to life.”

But the ROV is just the beginning of a bigger idea and plan at Bluffton. Starting in the 2018-19 academic year, Bluffton will offer a pre-engineering major.

“Bluffton’s program covers all of the foundational courses in mathematics and science that students will need to pursue engineering further,” said Myers.

“Previously, Bluffton students who were interested in engineering were encouraged to major in math or physics. We’ve had success getting students accepted into engineering programs in this manner. However, the pre-engineering major streamlines the process. It’s a good path forward for future students.”

By bringing in more students who are interested in design and construction, Myers is excited about the potential for additional collaboration.

“There are not as many people as there used to be with the knowledge of hardware and the experience of actually building something,” Myers said. “There are a lot of young people who are naturally good at computers and software and programming, but there are advantages for people who know how to build.”

He’s also excited to see how the various majors, professors and programs will become closer once the Austin E. Knowlton Science building is complete.