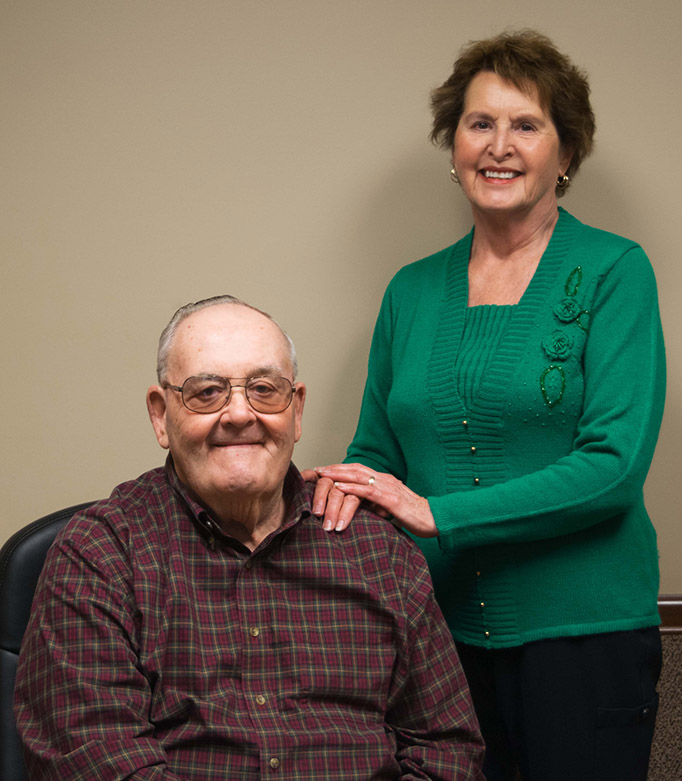 Nearly 60 years after graduating, C.K. and Harlene Steiner’s time at Bluffton continues to shape the way they live their lives just outside of Smithville, Ohio. Through simple acts of service and generosity, they have made an impact on their community and on the world.

For C.K., many memories of Bluffton revolve around the mentorship of Dr. Howard Raid. The two instantly connected. “He was a farm boy from Iowa and not so different from me,” explained C.K., who said Dr. Raid saw the potential in him that he didn’t initially see in himself.

“Dr. Raid always told me ‘I’m not going to let you quit. You’re just as smart as anybody else in class.’”

The professor of business also challenged C.K.’s abilities through classroom leadership positions and additional responsibilities. Later in life, Steiner often recalled the business, moral and life lessons Raid instilled. “In a tough situation, I always thought back to what would Dr. Raid do, and I still try to follow that example.”

Steiner also unexpectedly fell into a leadership position as a senior defensive specialist on the football team, when the other co-captain was no longer able to be part of the team. “I needed to lead the team. That gave me a lot of strength and encouragement.”

These early experiences influenced Steiner’s leadership style through the expansion of Lowe and Young, the farm implement business from which he retired as owner and CEO, and through the growth of the family farm which started with 100 acres and 10 cows and now exceeds 1,300 acres and 1,000 cows.

Through all of the business and agricultural developments, C.K. mentored younger employees, his son and even a young acquaintance turned friend in the example of Dr. Raid. When a business associate’s son from Pennsylvania was set to attend college near Wooster, he visited the Steiners to get better acquainted with the area.

“Well, he ended up living with us during college. He did his internship with Lowe and Young and even had his graduation party at our house. Each week we would pick up the newspapers and study the models and prices of the farm implements, and he graduated at the top of his class. I guess this was our way of paying it forward to Dr. Raid.”

“He called our house his ‘90-minute home away from home,’” added Harlene. They remain close friends.

As a teacher with a social studies concentration, Harlene taught, tutored and subbed in the Smithville community for 37 years on a wide range of topics—from economics, to psychology to world history. Enticed by the work-study opportunities, she came to Bluffton from a small farming community. She relished meeting students from other countries.

“It awakened an interest. I enjoy meeting people, and I’ve learned over the years people are the same, wherever you go. We all like to be together, and we all like to laugh together.”

The desire to learn more about other cultures has led Harlene to explore and serve during mission trips to Kyrgyzstan, Cambodia and Thailand. The couple also hosts the development director of Grace Refugee Outreach Worldwide when she does annual visits to the United States updating supporters as to developments and needs of her ministry with abused and neglected children in Thailand.

Harlene has also kept a lively discussion forum active for more than five decades through a Round Robin letter writing group that includes a dozen women who became friends at Bluffton. While families grew, careers climbed and addresses changed, the group continues to stay connected.

“In college, the professors encouraged discourse. In the Round Robin group, we’ve kept that going. We don’t always see things the same way, but we continue to talk about ideas and that’s really refreshing.”

Over the years, the couple has pushed themselves to improve their community and beyond through professional, volunteer and philanthropic leadership. And just as they have remained connected to their friends from college, they remain connected to Bluffton and its motto—The Truth Makes Free.

“I’ve learned as I’ve gotten older, there’s no sense in fooling yourself or lying to yourself,” said Harlene. “It’s a freeing thing to truly know yourself, to examine everything around you and to, at the same time, be willing to accept new things.”