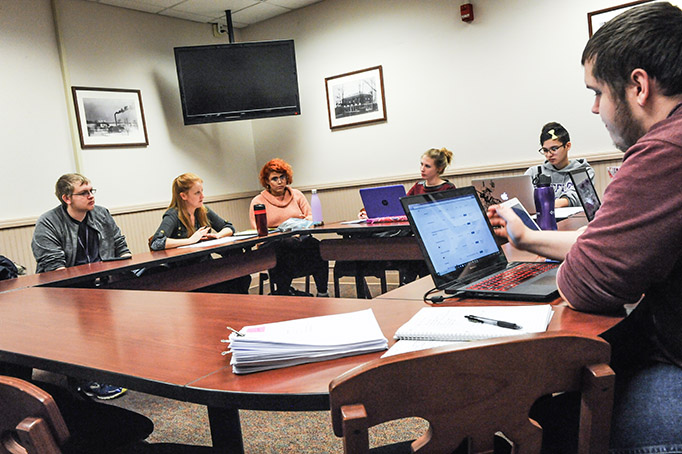 Walk into a meeting for “Bridge: The Bluffton University Literary Journal” and you’re likely to hear a lot of passion and a lot of persuasion but not a lot of pushback concerning the final decision. That’s because students involved in the publication’s editorial decisions are learning the skills that are necessary in the publishing industry, such as organizing a large-scale production and time management. However, they’re also developing skills that will benefit them immensely in life—how to handle disappointment, how to
take and give constructive criticism, and how to agree to disagree.

“We disagree about what should or should not be published all the time, but we never get angry about it,” said Cara Echols, a junior art and writing major from New Bremen, Ohio. “Instead, we’re having honest discussions where we get passionate, but that’s okay because we’ve learned how to effectively communicate in a professional setting.”

Cameron Miller, a sophomore English major from Grabill, Ind., agreed. “It’s not a skill I had a lot before ‘Bridge,’ but I’ve learned to look someone in the eye, disagree with them and then go have a hamburger with them.”

“What I’m noticing is a growing confidence in my students,” said Fletcher. “At the beginning, maybe some of them weren’t sure they could be right, and now they have the courage to speak up when a piece really matters to them.”

“Bridge” is a literary magazine that accepts submissions from young people, ages 14-24, from around the world. Work ranges from poetry to short fiction to art and comics. The first print magazine, edited and designed by Bluffton students, was published in the spring of 2017.

“When I look up and see the magazine that I helped publish on my bookshelf, it’s just an incredible feeling,” said Ruthanne Stucky, a senior English and writing double major from Archbold, Ohio. “By being part of ‘Bridge,’ I feel like a professional and not just a kid taking some college classes.”

Students also put together an online edition which followed in the fall. The spring 2018 print edition is now available. Students serve in a variety of roles—as editorial associates, community engagement leaders, submissions managers and layout designers. The students switch roles every semester to gain a broad range of experiences and many hold multiple titles at the same time.

“They are learning the ropes of publishing, and these are highly transferable skills,” said Fletcher. “Because we are a small magazine on a small campus, we wind up with a bunch of renaissance workers who are very well prepared for a 21st century workplace because they have a cross-section of skills.” 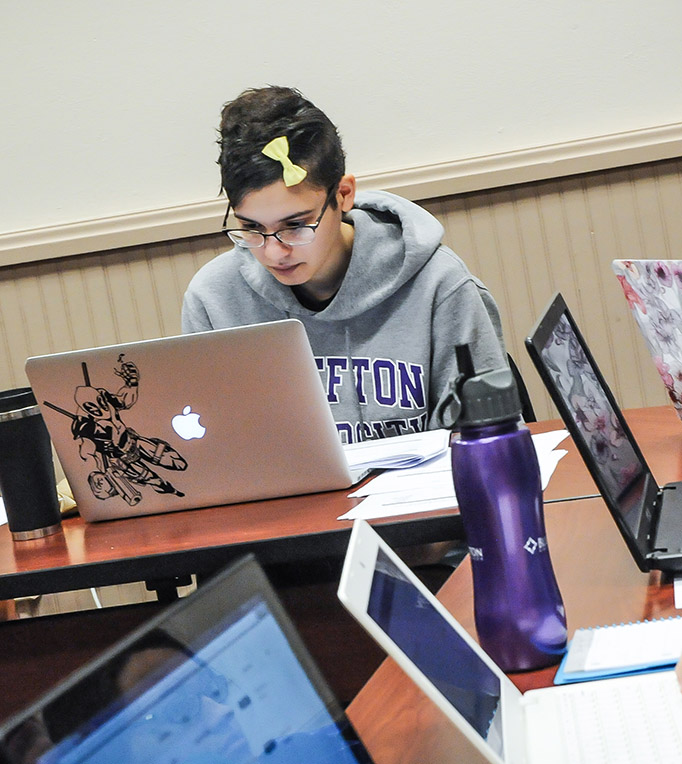 For the most recent print edition, close to 500 pieces were submitted by young people from as close as Bluffton to as far away as India. Each piece went through an exhaustive review process. The final publication features fewer than 30 works of literature and art.

“We have a growing submission base and within the first year we saw a few international submissions trickle in, and now we have a lot flowing in,” said Fletcher. “The word is getting out that our journal is interested in voices from Pakistan and Nigeria, but we’re also just as interested in voices from Toledo or Lima. We look for which piece has the most literary merit with a certain amount of entertainment added in.”

As a way to promote “Bridge” and the opportunities at Bluffton, Fletcher routinely provides writing workshops at high schools on topics ranging from writing memoirs to playwriting. Almost always, she brings “Bridge” students to co-teach.

“I try to convey to my students what writers actually do, and writers often give talks and lead workshops,” explained Fletcher. “So if we’re invited to a school, throughout the day I give them more responsibility. By the end of the day, they are teaching and leading the workshops on their own.”

Between the workshops and “Bridge,” Fletcher is pushing her students to take ownership of the publication and of their abilities.

Senior Alissa Hauke signed up to work for “Bridge” because she needed an extra credit. However, reading the submissions and being part of the editorial process has increased her confidence in her own work.

“‘Bridge’ is the first publication I’ve submitted to,” said Hauke, an art and writing major from Leesburg, Ohio. “I’m perfecting my voice, and I’ve been a little too timid to submit my work. But, after this experience and reading the submissions that are coming in, I’m getting braver.”

Copies of the printed Spring 2018 Bridge may be purchased for $8 each, which includes postage to anywhere in the U.S.

To place an order, please send a check or money order payable to “Bluffton University - Bridge” to the following address: