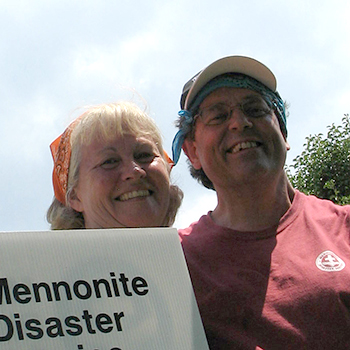 Lawrence and Louise Matthews' first reaction to news of natural disasters is probably familiar to many people.

"Any time that things like this have happened, we would say we wish there was a way to help," says Louise, a 1978 Bluffton graduate—like her husband—and now director of The Lion and Lamb Peace Arts Center on campus. "We always talked about it."

The daughter of a Mennonite Disaster Service (MDS) volunteer, she had aided in a post-tornado cleanup in Alabama the summer following her high school graduation in 1974. Then, after Hurricane Katrina devastated the Gulf Coast in August 2005, she and Lawrence got involved jointly with MDS for the first time. The next spring, they joined a group of 20 that did primarily home repair for a week in a bayou area south of New Orleans.

"At the time, I didn't know there was such a thing as a CCP (church contact person) for MDS in every Mennonite church," says Lawrence, Bluffton University's financial aid director. By 2012, though, when the Matthews' church, First Mennonite in Bluffton, was in need of a contact person, their "great experience" in Louisiana and desire to serve convinced him to take the position.

In the nearly two years since then, he has coordinated trips— and often traveled with Louise and the other volunteers—in the aftermath of tornadoes in Joplin, Mo.; West Liberty, Ky.; and Shawnee, Okla., and to Crisfield, Md., in the wake of Hurricane Sandy.

Last November, he also was elected secretary/treasurer of the Western Ohio Unit of MDS, at a unit meeting held in conjunction with training for contact persons and early response teams at First Mennonite Church.

Organization
The disaster service website says CCPs "water the grass roots of MDS with information and encouragement." That includes, for example, letting a congregation know when MDS starts a relief fund for a disaster-stricken area, through an announcement in the church bulletin, Louise notes.

A regional director—there are four in the United States plus one in Canada—and a unit coordinator—there are two in Ohio—assess damage from a natural disaster in coordination with federal and/or state emergency management officials, Lawrence says. With permission, MDS early response teams are then sent in to help clear trees and other debris, and even roads, while the Red Cross and other early responders provide food and shelter for victims. "Every disaster is different; it takes on its own characteristics," he points out.

Individuals may contact MDS binational headquarters in Lititz, Pa., to inquire about helping in a disaster area—as he did prior to the 2006 trip to Louisiana, Lawrence says. But it's more common for a CCP to contact headquarters to learn what the needs are and opportunities for people to serve, he explains.

Going where needed
The first service trip he coordinated as contact person at First Mennonite was to Joplin, Mo., where a tornado ripped through the city in May 2011. The travelers, who included parishioners from both First Mennonite and Grace Mennonite Church in Pandora, Ohio, helped with home construction from Oct. 28-Nov. 3, 2012—the same time Sandy was hitting the East Coast. While they were heading west, the local volunteers passed caravans of power trucks going east to respond to the hurricane. "A year from now, we will probably be going east" to aid with recovery from Sandy, Louise remembers saying.

In Joplin, a space was donated on which MDS was allowed to build a warehouse of sorts. Bunk beds were installed there, along with a mobile kitchen, restrooms and showers supplied by the disaster service. When MDS completed work last year in Joplin—where it served under the direction of the Rebuild Joplin organization—the structure was turned over to the property owner.

Following the trip to Joplin, two groups were organized— for a week each in January and March 2013—to assist in West Liberty, Ky., which was hit by a tornado during a March 2012 outbreak. Among the volunteers who went to West Liberty were emeriti Bluffton faculty members Donald Brubaker (social work) and Robert Suter (chemistry).

Twelve parishioners from First Mennonite and one from Grace Mennonite then volunteered in Crisfield, Md., in July 2013. Using a deserted American Legion hall that had been donated to MDS as its base, they did some repair work and helped with two new homes. That contingent included emeritus faculty member Willis Sommer (business, and vice president for fiscal affairs), as well as Art Shelly, a current assistant professor of computer science and campus network manager; his wife, Lisa, and their daughter, Amber.

In Crisfield, collaboration extended to a Baptist church in Virginia that had committed to providing cooks for workers as long as MDS was there, Louise says. There is interdenominational unity "in the effort to restore hope for these people" affected by disasters, she notes. While any one person, or group, can only make "a dent" in one week at a site of considerable loss, realizing you're helping someone makes the effort worthwhile, she adds.

Crisfield was again the destination for two new groups of volunteers, organized by Lawrence, for two weeks this February.

Travelers to Shawnee, Okla., in October 2013 were housed in part of a church complex that was also offered to MDS. While the church continued to use its sanctuary, a wing of the complex was remodeled over several months for the incoming volunteers. During their stay, they helped repair one home damaged by a May 2013 tornado and put in footers for one new home.

Making a Difference
"You just do what's in front of you," says Lawrence about the work of MDS. "Everybody has different gifts, and there's more to do than just build houses," he continues, citing another kind of building—of relationships—as an example.

He and Louise say people who are being helped often express their thanks when they see the MDS logo on volunteers' name tags or on the sides of their vehicles—or, in the case of one Joplin resident, while he was sitting across the street watching them work. "I didn't think Jesus made good people anymore, but then I met you people," the man told them.

As a contact person, Lawrence says he has learned that there are people in every church who would like to serve at a disaster site, and that MDS has the systems they need in place. "My goal as a CCP is to help others plug into those systems," he says.