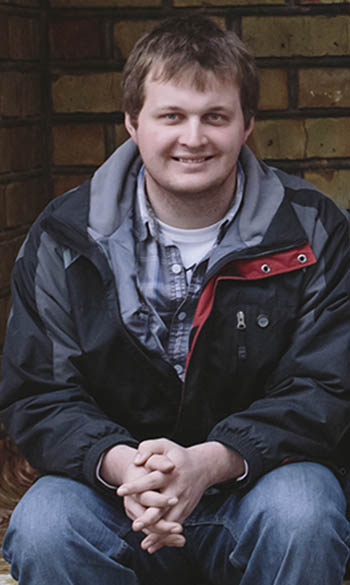 Less than a year after earning his Bluffton diploma, Micah Yoder got a chance to do what he says he had hoped to do with it.

The 2012 graduate wanted to use his degree in business administration and marketing "for something good, not just for a paycheck," he explains. So when the opportunity arose to accompany another member of his church on a business-, and faith-, related journey to the Central Asian nation of Kyrgyzstan, he didn't pass it up.

During the March 2013 trip, Yoder, from Apple Creek, Ohio, provided marketing advice while Jerry Christensen, owner of Apple Creek's Morning Star Fiber, investigated the potential for establishing a mini-mill in Kyrgyzstan that would also benefit farmers in the mountainous country.

They had started talking at church—Fairlawn Mennonite in Apple Creek—with Christiansen learning that Yoder was marketing coordinator at Keim Lumber Co. in Charm, about 20 miles away.

Yoder learned, in turn, about Morning Star Fiber, which processes alpaca, llama and other fiber either for the area farmers who provide most of the fibers or to make its own marketable products, he says. Those fibers now include merino sheep wool from Kyrgyzstan, he points out, noting that Christiansen had previously gone to the former Soviet republic, "and developed a love for the people" particularly farmers he would like to offer fair pay for their goods through his desired business.

Those farmers haven't been paid fairly by others for their cashmere goats, used mainly for milk and meat, Yoder continues. Christiansen gave them special combs, he says, so they could brush high-quality cashmere out of the goats. After securing a fiber expert last March to determine the cashmere was of sufficient quality, Christiansen helped them sell it to a clothing maker in California. All of that was done, Yoder adds, to help the people understand Christiansen is serious about the economic development initiative, and to establish a relationship with them for the time he hopes to have the mini-mill running in their country.

When Christiansen asked if he wanted to make the trip a year ago, "how could I say 'no,'" Yoder asks. With the mill owner looking to move to Kyrgyzstan, his wife and two of their eight children also went, as did the fiber expert and a photographer. Most of their three weeks was spent in the city of Osh, where their activities included meetings with a local artisan about the possibility of using fiber to create wall hangings and other art for sale.

Mainly, though, Yoder says he was observing and offering marketing-related feedback on what he saw. More specifically, he was considering how he could help develop the story of the people "behind the brand" and how the Americans could return to the United States and tell that story, he relates.

A large show of the farmers' goods and presentations have been discussed—and one presentation has been made —but there are "still a lot of things that have to get established in Kyrgyzstan" before Christiansen's dream comes to fruition, Yoder concedes. That means cultivating more relationships and getting through "red tape," he says, to show intent to run a good business, and with honesty.

Another goal is "making people aware that whatever they're doing can be done to bring glory to God," he notes.

"You don't have to be anything special to serve God," adds Yoder, calling Christiansen "just an average guy" who wants to use a fiber mill to impact the world for good. A Kyrgyz man he brought onto his team to be the main contact with farmers learned about fiber grading from the expert enlisted by Christiansen and is now in Apple Creek, receiving training on the fiber milling process and how the machines run.

"I always had a dream of owning my own business someday," says Yoder, whose family moved to Ohio from Iowa in 1999. Both of his grandfathers owned businesses—one is now a retired Mennonite pastor in Kalona, Iowa—and his father, Gaylen, works for an Amish furniture manufacturer.

But for now, he is enjoying his marketing role at Keim Lumber—a family business whose values are built around honoring God, he says—and being involved with Christiansen's project, which he compares with work performed by Mennonite Economic Development Associates.

MEDA, whose annual conference he attended as a Bluffton senior in November 2011, aims to create business solutions to poverty, informed by its faith-based values. In that vein, the Kyrgyzstan effort represents "business as a calling," Yoder says, "and not just a way to make money."