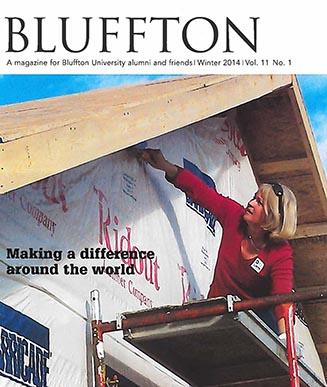 Service is one of the university's four enduring values and, through the efforts of alumni, faculty, staff and students, it is readily identified with Bluffton. Among those carrying on the tradition of service ingrained in the campus experience are three  alumni—one of them also a staff member—and one current senior who have served abroad.

What qualified as a leap of faith at the time, in 2006, has helped create ongoing ripples and relationships from Lima, Ohio, to Tijuana, Mexico, and back. Ted Bible's weeklong mission trip to Tijuana that August was the first of 10 he has now made to the Mexican city. And some of his fellow parishioners at Lima's Forest Park United Methodist Church have joined the mission effort.
>>>more

Laura Frey has gone to Costa Rica every year for the last five years and, this time, she can see herself staying for the next five years. "I don't really see anything now that would take me away from this job," says the 2009 alumna, referring to her role as program assistant in the Latin American Studies Program (LASP).3
>>> more

Less than a year after earning his Bluffton diploma, Micah Yoder got a chance to do what he says he had hoped to do with it. The 2012 graduate wanted to use his degree "for something good, not just for a paycheck," he explains. So when the opportunity arose to accompany another member of his church on a business-, and faith-, related journey to the Central Asian nation of Kyrgyzstan, he didn't pass it up.  >>> more

June 3, 2013, marked the beginning of a 27-day journey for Bluffton baseball player Tim Webb. The senior from Delaware, Ohio, traveled to the Dominican Republic as part of an Athletes in Action baseball team that blended spirituality with sport.
>>>more

Lawrence and Louise Matthews' first reaction to news of natural disasters is probably familiar to many people. "Any time that things like this have happened, we would say we wish there was a way to help," says Louise, a 1978 Bluffton graduate—like her husband.
>>>more