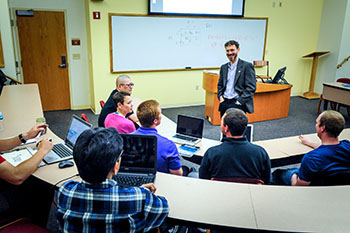 “There have been thousands of attempts to replace GDP as the measure of well-being, and they’ve all failed,” said Dr. Jonathan Andreas, professor of economics.

Despite understanding the uphill battle he is undertaking, Andreas is also attempting to change the way economists and world leaders measure well-being because he realizes the climb is necessary. For years, Gross Domestic Product (GDP), despite its flaws, has been the standard measurement of well-being, but Andreas recently presented his original research in an effort to sway world leaders and fellow economists toward another standard—MELI.

MELI stands for Median Expected Lifetime Income, and Andreas developed the formula as a simpler and more accurate measure of well-being.

“I absolutely think MELI has the potential to improve lives. Economists agree GDP is a bad measure. The problem is nobody has been able to agree upon a better measure,” said Andreas. “If we were just using a better measure, which MELI is, it would have an enormous effect on how we think about minimum wage, monetary policies, taxation, environmental regulation and even recessions. If policymakers were paying attention to a better measure than GDP, we would have better policies and that would trickle down to the average American.”

Andreas traveled to South Korea at the end of April to present this research at the International Association for Research in Income and Wealth conference. Power players from agencies including the International Monetary Fund, the World Bank and the Bureau of Economic Analysis were in attendance.

“A couple of people have expressed interest in collaborating on this topic including somebody at the World Bank and somebody at the United Nations. They have resources that I don’t have that would be really useful. They have data on every country in the world, and it’s the data I need,” said Andreas.

Andreas is currently using data models developed by Bluffton students including Matthew McCoy ’15 and Jake Headings ’16 through a super-computing grant Dr. Stephen Harnish, professor of mathematics,received from the National Center for Supercomputing Applications. The topic is discussed in his undergraduate and graduate classes. 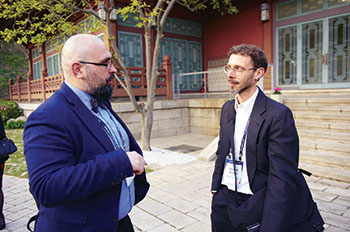 About 75 economists attended Andreas’ plenary  session at the conference which was hosted by the  Bank of Korea. The conference theme was “Beyond  GDP: Past Experiences and Future Challenges in the  Measurement of Economic Well-Being.”

“Compared with GDP, MELI is a relatively cheap and  easy thing to measure, but this is not a one-person change. This is a social process. This is a  paradigm shift. If I can get a couple of people in a couple of bureaucracies to start working on this, it  could take off."

MELI is measured by adding up the median income for every age group in the population weighed by the probability of survival to each specific age. It is an expected value of how much a newborn would earn in a lifetime, if economic conditions persisted as they are in the current year.

“Intergenerational mobility is plummeting. During our parents’ generation, almost everyone became more prosperous than their parents,” said Andreas. “In our generation, that’s not happening.”

Andreas believes MELI would help provide a reality check because its data would provide a standard definition for the middle class—it could be statistically mapped out. He also believes using MELI could help motivate policymakers to stem rising inequality in the United States.

Since his return from the conference, Andreas continues to push for MELI. He is currently reviewing feedback and is revising his research.