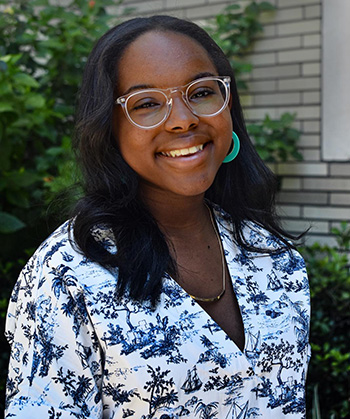 Ashley Chatmon is a 17-year-old writer at Douglas Anderson School of the Arts in Jacksonville, Fla. She has won the Scholastic Art and Writing Gold Key Silver Medal and has been published in the Elan literary magazine. She draws inspiration from connecting with her local arts community.

I still had to clean the bathroom. Pieces of him were dotted across every surface. A bottle of shampoo labeled two in one. Half full. A dirty razor on the soap dish.  I wondered why a grown man had a razor in the shower. Was he seeing someone? Did he just like the feeling? Maybe it made him feel softer, kinder, more feminine.

This was his house. I had met him two or three times, but he hung over every family gathering like a question mark, uninvited. In fifth grade I went on a field trip to the Smithsonian. I was wide-eyed and overwhelmed, shuffling alongside what felt like miles of glass panels. I felt the same way now, at arms-length, not knowing what to make of the things I had found.

I remember the way my mother spoke about him when I asked as a child. He was the estranged brother who skipped church, ignored curfew, moved out at sixteen. That was all she ever told me. I learned to stop asking.

I was the one to “handle the house.” Being the youngest of the adults, teetering in-between child and authority, I had no leverage to argue otherwise. It was a gruesome event. His smell lingered in the house even after he was removed. I dressed in the bathroom. I was not ready to see the bedroom. That is where he did it. It was days before anyone knew.

I found myself examining scuffs on walls. Stains in carpet. Little signs of life. I thought maybe I could piece together some semblance of who he once was, this mystery man.

I wandered into the living room carrying the shampoo and razor I found in the bathroom. I put them on the floor. When my eyes met the couch’s big black cushions, I felt obligated to yank them off. I stacked them to the left of the couch.

I took all the things I could grab and placed them in the center of the living room with the shampoo and the razor.

In the center there was already a growing collection. A stack of books from the bookcase that held more dust and knick-knacks than literature. A broken lamp caked with dust.  Two coats that hung on the coat rack.

I looked down at my small bricolage, only scratching the surface of what was to be added. When I was finished, if I ever did finish, I expected the items to stretch into the hallway. A line of little things small enough to hold carrying towards the dining room, rolling across the table. And then what? Would I take each piece in hand, one by one, try to decipher its meaning, if it had any at all? It's all just stories then. But so was everything else on Earth.

In a closet I found a shoebox filled with cards. Birthday, get well soon, congratulations, thank you. Every hallmark handwritten sentiment. He was a solitary old man, or at least I had thought so. Yet this box was so full it looked like it could buckle. I kneeled down, my bottom resting on my heels. A valentine’s card drew my attention. He had never married, my mother had told me, he never cared for romance or anything decent. I picked the dishelved card out of the shoebox in what felt like an invasion of privacy.  Now and forever, Gregory. They were all signed something like that. Missing you dearly, Gregory. Till our last breath, Gregory.

There must have been two-hundred cards, all signed with the same name. I close the box. When the rest of the family comes up tomorrow, they will not find it here. Some mysteries are meant to stay that way. I think he knew that.