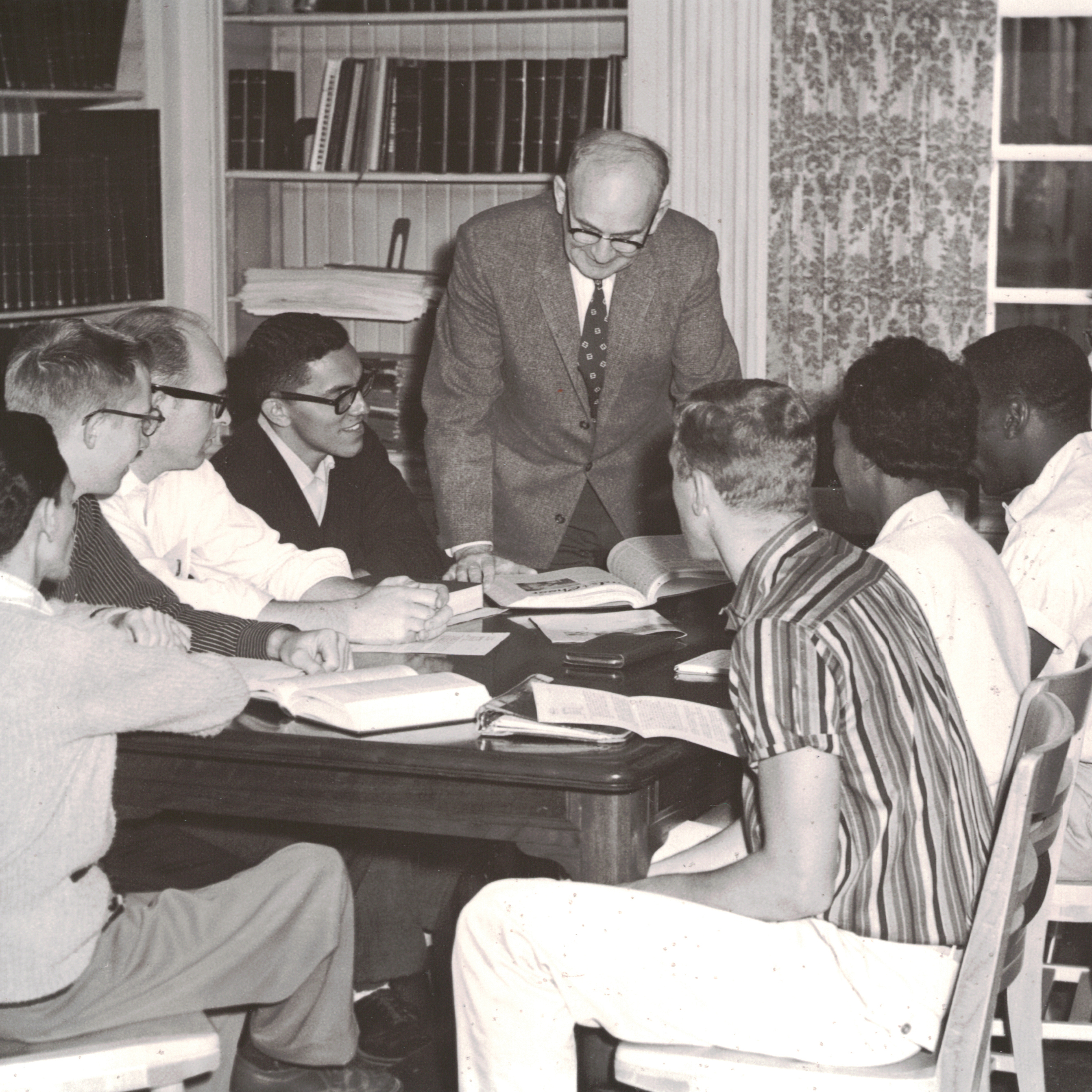 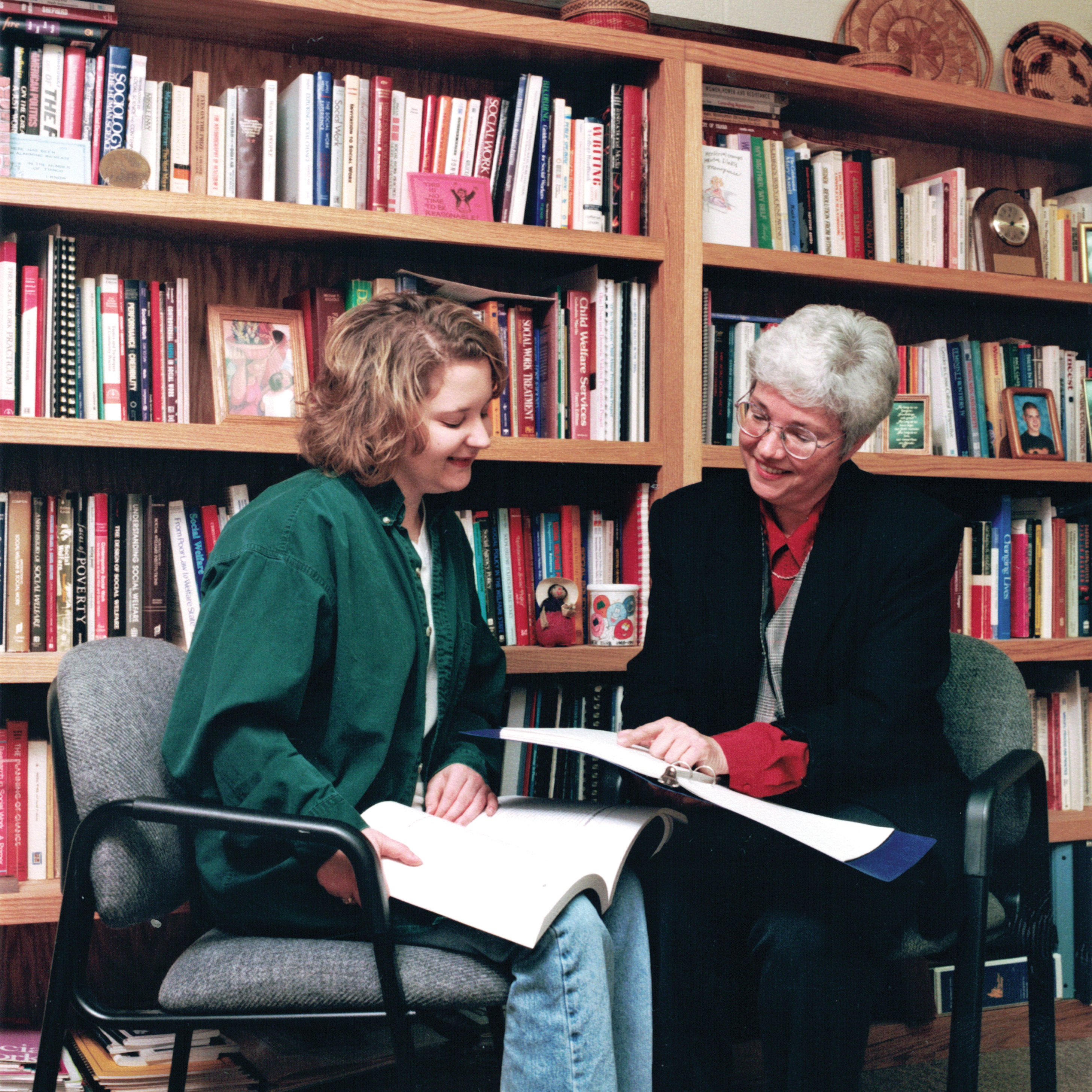 The founding of social work 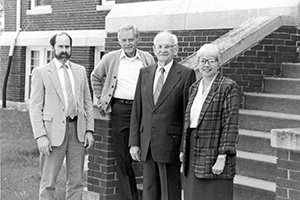 Because of the Great Depression, Smucker was lucky to find work following graduation in a children’s home, according to his daughter Mary (Smucker ’65) Conrad. The position led him to pursue his Master of Social Work at the University of Chicago.

Conrad remembers her father, who passed away in 1997, fondly recalling studying under Jane Addams, who is often referred to as the mother of modern social work.

“He was very inspired by her work,” explained Conrad. “He was drawn to the field because he cared about people and about people in distress. His career in social work helped him express his Christian compassion.”

At the request of Dr. Lloyd Ramseyer, Bluffton’s fourth president, Smucker added more classes and developed the first social work program among the Mennonite colleges in the United States.

“My father didn't just found the social work department, he lived it, and so did my mother [Irene (Yoder ’63) Smucker],” said Conrad. “My mother was an equal partner in helping the students and being a part of the students’ lives. It mattered to them.”

Paul Klassen ’48 was one of the first three graduates. During his first year at Bluffton, he admits he was more interested in playing sports than picking a major. Then he was drafted. As a conscientious objector, Klassen spent three years in alternative service at a New Jersey psychiatric hospital.

“The hospital was progressive for that time, but not really, though,” explained Klassen. “It was quite an experience for me at 18-19 years old.”

Passing the torch
That experience, combined with an appreciation for the work both Smucker and his fellow COs were doing, led him to social work. After a long career as a practitioner, Klassen took over for Smucker and led the department for 10 years.

“We took all of the graduating students to Cleveland for their capstone course, and they were able to experience some of the best social work learning in the state,” said Klassen, who also started a cross-cultural studies program to Cemanahuac Educational Community in Cuernavaca, Mexico. The experience, which was open to all students, featured a work placement project in agencies including children’s homes.

“When our students went down, they learned more from the relationships with the people and the students there than you could possibly imagine,” said Klassen. Students from Cuernavaca completed the exchange with learning opportunities at Bluffton.

Klassen, along with Betty Sommer, also continued work begun by Smucker to get Bluffton’s social work program nationally accredited. The feat was achieved in 1983, and the program continues to maintain the designation. Bluffton was just the second private college in Ohio to meet the rigorous standards.

In 1979, Sommer started teaching at Bluffton part time after serving as a social worker in locales from Washington, D.C., to Nairobi, Kenya. She became a faculty member in 1985.

Sommer, who passed away in 2017, fondly recalled her career at Bluffton in a magazine profile when she was recognized with the 2011 Faculty/Staff Service Award.

“I enjoyed working with students, especially teaching them to apply theoretical concepts to helping actual people and solving social problems.” said Sommer. “As a part of that process, almost every course had an outside the-classroom assignment or project, often in conjunction with local social service agencies. Through these ‘realworld’ experiences, students could see the relevance of the classroom learning.”

Growing the program
When Klassen retired in 1987, Don Brubaker, a social work faculty member at Ohio Northern University, was hired to lead the department.

“The values of social work and the values of Bluffton College were quite compatible,” said Brubaker, who spent 21 years at Bluffton.

In a callback to Smucker, Brubaker explained he chose to enter the field of social work to “live out my Christian beliefs and values.”

His initial goals were growing the major and maintaining accreditation.

“The pressure was increasingly to have competency-based programs, where goals could be identified and measured,” said Brubaker.

However, hands-on education continued to be a key part of the educational experience. Brubaker and Sommer led several weekend experiences to Chicago and many courses required volunteer experience at area nonprofits and social service agencies.

Many students also shared research from their studies.

“Sometimes it was before the staff of an agency and sometimes much broader than that, and they were giving professional presentations at conferences,” said Brubaker. “I was always very proud of the students demonstrating the confidence to do that.”

Still, being a student is different than being a professional.

“I recognized that many times, as students were preparing to do their internships, they would question, ‘Do I know enough? Do I have the right answers for my clients?’” said Brubaker. “But, it’s not about having the right answer, it’s about asking the right questions and knowing how to listen.”

While many social work graduates continued their education, moved away and practiced in other states and countries, Bluffton’s social work program had, according to Sommer, not only improved the educational opportunities on campus, but the entire region  of northwest Ohio.

“I believe the quality of social services in our area has been enhanced by the contributions of our graduates.”