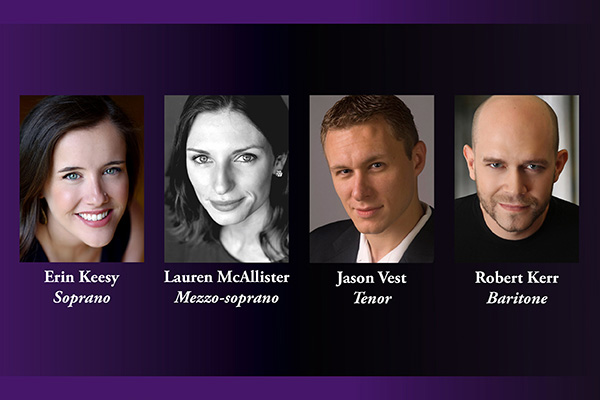 Soloists for the 2020 Bluffton University performance of Handel's "Messiah."

Bluffton University’s music department has announced the soloists for its 125th performance of Handel’s “Messiah,” at 4 p.m. Sunday, Dec. 20, via livestream at www.bluffton.edu/mus.

She earned her master’s degree and artist diploma in opera from the University of Cincinnati’s College-Conservatory of Music.

McAllister’s recent appearances include the Queen City Opera and the Lubbock Symphony. She also joined Conspirare for their 2018-19 season and performed with Cincinnati Soundbox as an artist-in-residence, where she premiered works for vocal trio and for solo voice, bass and percussion. She has appeared as Lazuli in “l'Étoile” for Sin City Opera, Melanto in “Il ritorno d'Ulisse in patria” for Opera Louisiane, and as the mezzo soloist for the Duruflé “Requiem” with the Cincinnati Fusion Ensemble.

McAllister earned Master of Music in Voice Performance from the University of Cincinnati’s College-Conservatory of Music.

Vest was most recently featured with the Cincinnati Opera in Richard Strauss' “Ariadne auf Naxos.” Vest has also appeared with Amarillo Opera, Stara Zagora and Plovdiv opera houses in Bulgaria, and Cincinnati Chamber Orchestra. He has been the featured soloist in the works of Bach, Handel and Rachmaninoff. Vest has worked with composers to premiere their works in roles he originated or debuted. He is also a member of the Grammy-award winning choral group Conspirare. He is an assistant provost and professor of voice at Northern Kentucky University.

Kerr has performed as Germont with the Philharmonia Orchestra of New York at Lincoln Center and sang the King in “Aida” with Opera Columbus. He’s recently had solo engagements with the Hudson Valley Philharmonic, the Ohio Song Project and Denison University. In addition he participated in Opera Columbus' world premiere of “The Flood” by Korine Fujiwara directed by Stephen Wadsworth; he was soloist in Mozart's “Requiem” with Philharmonia Orchestra of New York; and was the title role of “Rigoletto” with Opera Projects Columbus.

Kerr holds a Bachelor of Fine Arts in Musical Theater from Ohio Northern University and a Master of Music in Voice Performance from The Ohio State University.

Dr. Bo Young Kang, director of choral activities, will conduct select portions of the oratorio with current Bluffton students serving as the chorus and a string quartet. The streamed production will also include a retrospective of “Messiah” at Bluffton with archival footage, recordings and reflections.