Some would say language is art that bridges ideas
split by invisible chasms. Only the skilled few can reveal
the connections between metaphor’s two parts.

Others would say language is manipulation that misleads
the humble tourists into the caves of the skilled few
who enslave them with their fake news and PC rules.

We fear how language can damage deeper than bones
by beautifying, by justifying ideas that shouldn’t be condoned.
We want it raw,
presented without dressing like our friends would,
though we all command with the question:
Can you pass the salt?

Before a child is learned in words, they cry to spill into their parents
the message of their hearts, pure and unrestrained.
I wish I could do the same—make known all that is within me
beyond what I can speak so no one can say
I pulled them along with my slanted lines
of poetry. But I pick my words precisely
just like those before me
who used them to heal and hurt. 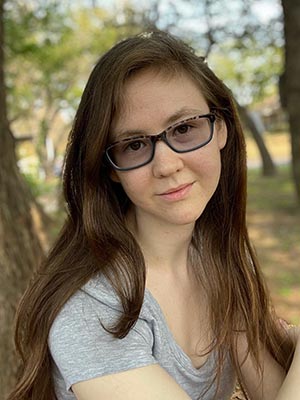 Mary K Gowdy is a poet, author and recent graduate from the University of North Texas. Her poems have been published in the literary magazines Earthwinds and Better Than Starbucks. She has published a fantasy novel, The One-Sided Coin, and is working on her first poetry collection.