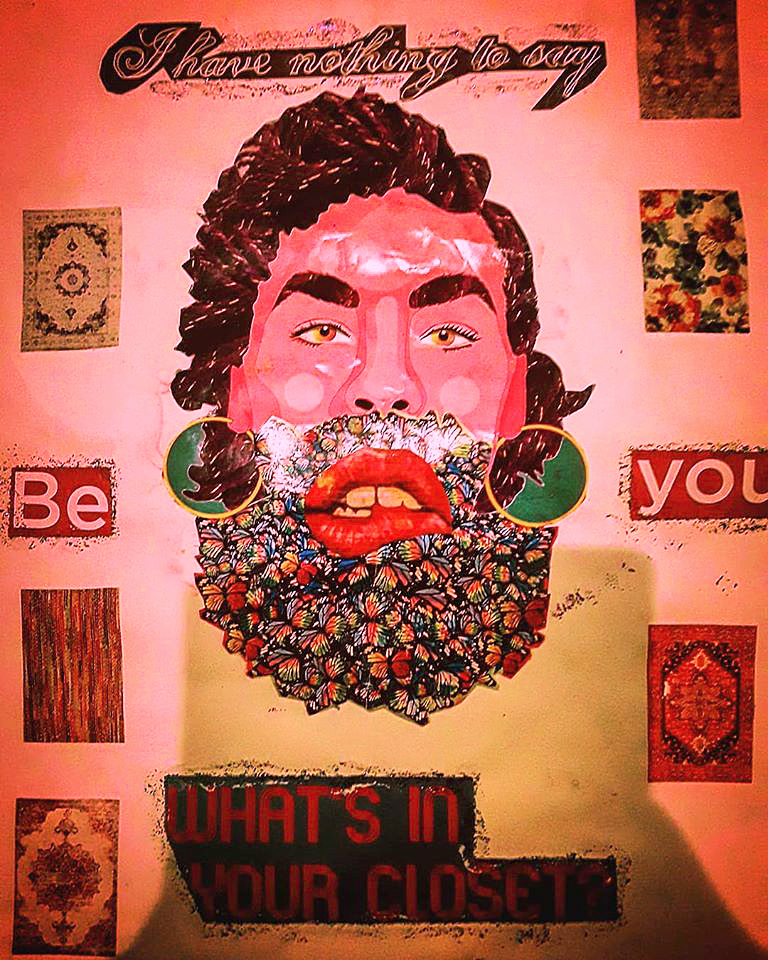 In a world that the status quo is conformity, which we all partake in for a sense of safety and to avoid judgment, it's humorous to hear time to time from a few of my own supporters to express myself in any way which makes me happy, when in fact I fear the cost it takes to be standing on my own, sometimes alone. Through all the trials and tribulations I've faced, bullying, discrimination, domestic violence, and homelessness, the one thing that keeps me alive to survive is having myself, even when allies aren't there to be my backbone of defense. I've learned through my life's journey as a unique perspective emerged, that outside of societal constructs, we are all truly different, yet the same.

The collage, "Be You," is a statement of defiance, presenting my gender ambiguity as viewed by others, like when I'm constantly asked in mockery "Is that a boy or girl?" or "Why can't he be masculine like the other boys?" or "That sissy/freak is going to hell." They are really asking, “What makes your existence legitimate, when the rest of us don't believe there's room for you here on planet Earth.” These internalized messages and limited beliefs have washed away my innocence as a young gender variant child. They make me believe there must be something "wrong" with me if I'm not a cisgender male, or at least can't play the part my environment expects of me. From birth, I was stripped of their acceptance and interests and forced to fit a binary, to be another "man" they viewed my assigned male body was meant to uphold those masculine duties, tarnishing my feminine traits and expressions I viewed as strengths. Hence, the transphobic narratives a patriarchal society places on me to degrade my humanity, I replaced with the simplicity of existing, reclaiming my identity, and representing myself with all my flaws, fears, and closets to still be a valid member of the human race. The collage is part of a 100 part mixed-media series, "The Future Is Queer." The series chronicles these experiences since 2016 when I was first denied safety in my home and streets for being queer, and where I began to experience the severity of otherness. The stories I've captured are from moments of hopelessness and degradation my cishet peers casted on me, from racial tensions in Charlottesville, to Trumpism and the rise of the alt-right in the 21st century, to documenting my own findings of repairing my identity; "Be You" is 1/100 art pieces reflected in the eyes of a Queer Journalist, reminding themself and the world, their worth.

“Be You,” details the complexity, fearlessness, rebellion, duality within all of us to reveal who we truly are, and the courage it takes to stand in your truth and proudly believe, "I'm Me.” There's nothing you can do to change me. If you don't like me, like another, or come join me in celebrating our differences. I truly believe that to achieve global peace is to co-exist as others. But as long as we are all trying to remain the same, there will never be a place for all the hidden parts of us to have the potential to thrive as a whole.

Je’Jae Daniels is a mixed media artist in NYC. They graduated from Brooklyn College in 2017 with a B.A in Media/Gender Studies. Their work focuses on the intersections of queerness, American culture and public perceptions. Their work is featured in over 40 galleries in NY including MOMA, Bronx Museum, Tribeca Film Festival, HBO, and BRIC media.

NEXT: Nocturnal, fiction by Grace Timko >