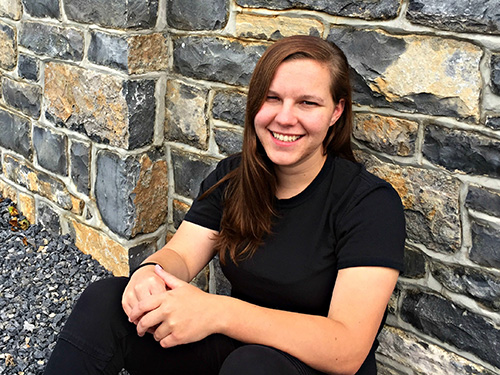 Mac Bowers graduated from Susquehanna University with a degree in Creative Writing. When she isn’t experiencing frequent bouts of existential crisis, she enjoys writing weird stories and talking about Scotland while sipping on far too many cups of coffee. Her online ramblings can also be found on Twitter @macbwrs.

Rory had just turned eighteen when she found a girl buried beneath a giant hickory tree in the woods behind her house.

She and her dad used to trek these woods, back when Rory was five, six, seven. They walked hand-in-hand over rocks, leapt muddy puddles, ducked underneath low hanging branches, and once in a while her dad would stop, point their joined hands to a stream of sunlight that slipped between tree leaves like slivers of gold. “Look at that, Rory,” he’d say. “It’s making magic,” and then he’d kick the dirt under his feet, add, “All hidden under our feet, like nuggets of gold.”

But that had been a long time ago, and Rory was grown now, so she went out into the woods by herself, hours after the sun had gone down, carrying a drawstring bag that held only a trowel and a Tupperware container she’d stolen from the kitchen. Every night, she slipped. She tripped over tree roots, caught her ankles in pricker brushes so an anklet of blood beaded her skin as she parted damp foliage. Every night, she stopped at a different square of earth, dropped to her knees, and dug.

She dug until her arm shook, until her wrist cramped, until bedrock and sunrise insisted she could dig no further. Then she got up, dropped her trowel back into her bag, wiped dirt from the skin of her knees because the denim of all her jeans had long since worn away, and went home, only to return and do it all again the next night.

Tonight, she dug until she hit flesh. Her eyes had adjusted to the dark well enough for her to recognize a pale hand against dirt. She dropped her trowel, sat back on her heels, wondered if she should run back for her parents or call the cops or just go home and pretend like she’d never seen it. And then a finger on the hand twitched in a very still alive sort of motion, so she dove forward and used her hands to scoop away dirt, revealing an arm. Then a shoulder. A collar bone and a long neck and then the face of a girl, eyes blinking.

“Hello,” the girl said. She sat up, and dirt cascaded from her shoulders. She brushed it from her arms, reached a hand up and scrubbed at the short hair on top of her head. She looked at Rory, and her eyes shone like two tiny pinpricks of light.

Rory swallowed, kept her eyes trained on the strange animal-shine rather than the pale, bare expanse of the girl’s shoulders, ribs, chest. “Hi.”

The girl looked around. Her gaze landed on Rory’s trowel. “You dug me up.”

Rory said, “I guess I did.” She didn’t know why she felt guilty.

The girl smiled, and for a moment it looked serrated, like the edge of a knife, before softening into something that Rory was able to recognize. “You can call me Locke. You know what happens now, right?”

Rory shook her head. She didn’t make a habit out of finding buried girls.

Locke said, “You have to take me home.”

Rory looked away, looked down, reached up to tuck the stray strands of her hair back into place. She frowned. “I still live with my parents.”

Locke said, “They won’t even know I’m there.”

Rory had never stopped to consider how lucky she was to have her room in the basement—and an outer door that went directly into that basement—until she tried to sneak a strange girl into the house. It was easier than it had any right to be, pushing the door open and urging Locke through it with a finger to her lips. Rory closed it softly behind them, pointed Locke in the direction of her bathroom.

Locke’s bare feet left trails of dirt and pebbles as she walked, remnants of the woods falling to the hardwood like mini percussion. Rory dispersed the mess with her shoes, kicked it into corners and against walls, told herself her parents never came down here long enough to notice, anyway.

“There’s the shower,” Rory whispered in the bathroom. “I’ll just get you a towel,” but Locke just stood there, blinking, so Rory leaned forward and turned the faucet on.

Locke stepped underneath the water, turned her face up against the spray. Rivulets of brown water ran over her thighs, behind her knees. Mud caked the drain, and Rory fled across the hall to her room, told herself that it was fear that pounded in her chest and tightened her throat. She snuck back into the bathroom a few minutes later with a towel, laid it folded next to the sink, tried not to look too hard through the steam.

When Locke walked into Rory’s room—towel wrapped around her shoulders like a cape—Rory had a bed made up for her out of spare pillows and blankets on the floor. Locke looked at it, then looked at Rory, but Rory was already shoving a spare set of pajamas into her hands and turning away. Rory studied the bright red folder on her nightstand and followed the curve of the embossed letters with her eyes. She swallowed.

“Don’t worry,” Locke said when they finally had her settled. She patted the pillow behind her, tugged a blanket up higher. “I won’t eat you in your sleep.”

Rory paused sliding into bed. “I didn’t realize that was a concern.” Her fingers shook a bit where she had them bunched into her sheets. “But why not?”

Locke frowned, tilted her head a bit, hawk-like. “I’m not sure.” And then she smiled again, that same smile that twisted at Rory’s gut, and laid down.

Rory dreamt that Locke was sitting cross-legged next to her head that night, twisting Rory’s hair this way and that, tying it into flowers. When she woke, Locke was sound asleep on the floor, and Rory spent too much time in front of the bathroom mirror, combing out knots.

Locke stayed and, true to her word, Rory’s parents never noticed. With Locke there, the basement felt like some other world, one that was completely their own. Locke wasn’t truly nocturnal, but she tended to wake from her nest on the floor sometime before dinner, and return to it long after Rory had already gone to bed. She pattered around Rory’s room, in Rory’s clothes, reading Rory’s books. She kept Rory up sometimes, with her eyes that shone like lamplight and the way she hummed strange tunes Rory had never heard before.

Rory didn’t know when she ate, wasn’t sure she even ate, until one day her dad said from the depths of the refrigerator, “I just bought beef yesterday,” and her mom peered over his shoulder, “We should have some chick—oh.”

She opened the basement door, started down the steps.

Rory waved it away and closed the door tight behind her.

“We need to be more careful,” she said to Locke, who looked up from where she sat curled into a corner, the red folder open in her lap. “They’re noticing food missing.”

Locke slid a piece of paper out of the folder, held it up. “What’s American University?”

Rory said, “A college,” and then, “Are you listening to me?”

Locke waved her away. Rory crossed the room and tore the folder from Locke’s hands. She opened the drawer to her nightstand, shoved it in with the others, pushed pushed pushed until it finally closed.

Silence descended softly, like a blanket. Locke crawled across the floor to retrieve a book from Rory’s bookshelf. Rory laid flat on her bed, pretending not to notice the way she felt Locke’s gaze land on her and then flick away again.

Eventually, she said, “Sorry I dug you up.”

Locke laughed, sharp and surprised. “I’m not. Can I ask—”

“Shut up,” Rory hissed. She pointed to the door, where shadowed feet peeked under the crack. She held her breath. She looked at Locke with wide eyes, but Locke stared at the door, her head tilted to the side.

An envelope, heavy and thick and embossed, slipped underneath the door.

Locke rose to her feet and Rory was terrified, just for a moment, that she was going to open the door. But she walked as softly as breath to Rory’s bed, leaned down until her lips ghosted the shell of Rory’s ear.

Rory shook her head, so minutely that it was barely perceptible.

Locke’s forehead thunked heavily against Rory’s temple and they sat like that, just for a moment. She smelled like a mixture between Rory’s shampoo and the dirt she’d been dug from. The footsteps retreated.

Locke whispered, “What were you looking for?”

They went into the woods. Rory donned her drawstring and Locke retrieved a sweatshirt from the closet and they snuck out through the same door they’d come in. They walked over tree roots and through pricker bushes, ducked under low hanging branches.

When Rory had determined they’d walked far enough, they stopped. She dropped to the ground and pulled out her trowel. Locke found a log next to her and sat crisscross on it.

Rory dug. Locke picked weeds and ferns and leaned forward to stick them haphazardly into Rory’s hair. Wrist deep in mud, Rory found a nightcrawler and placed it in the palm of Locke’s hand. They watched it crawl over her wrist, up her forearm, before Locke offered it her other hand and placed it back in the dirt.

They walked deeper into the woods. Rory’s fingers brushed the backs of Locke’s. She told herself it was accidental, and then did it again on purpose, to show herself the difference.

They walked until Rory’s legs grew tired, until the sun bled across the sky. Locke stopped, looked up. She pointed to the trees with long fingers, to where sunrise slipped in between the branches. She smiled with a mouth full of teeth that were sharp as a pricker bush.