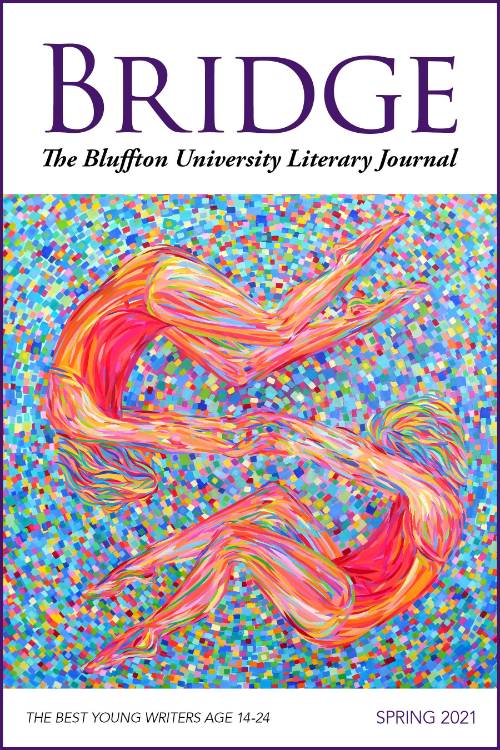 The blood surrounding my parents’ bodies reminded me of the punch I could never drink.

Red dye caused me to break out into hives, so my mother never let me drink what the other kids did. I was stuck with a nauseating color of blue while kids boasted about their scarlet covered teeth and tongues to their parents.

My color made me an outcast.

“Mommy?” I called out, my steady voice shattering the silence. “Daddy?” Neither body stirred.
Read Dye/Die >

Rory had just turned eighteen when she found a girl buried beneath a giant hickory tree in the woods behind her house.

She and her dad used to trek these woods, back when Rory was five, six, seven. They walked hand-in-hand over rocks, leapt muddy puddles, ducked underneath low hanging branches, and once in a while her dad would stop, point their joined hands to a stream of sunlight that slipped between tree leaves like slivers of gold. “Look at that, Rory,” he’d say. “It’s making magic,” and then he’d kick the dirt under his feet, add, “All hidden under our feet, like nuggets of gold.”

The smoker wore a green tweed jacket with elbow pads. He had shiny black hair that fell in tight ringlets over his collar. Because he always showed his back to her, Erna had no idea what his face looked like. He wore long black chef’s pants and blue rubber gloves up to his elbows. She assumed he worked for Le Labo, a cocktail club that shared an alleyway with the East Rose Inn, but she couldn’t be sure, as she’d never seen him enter or exit the building.

“Well, the good news is that you’re going to be perfectly fine.”

The sharp tang of disinfectant and fecal matter stung in Charlotte’s nose. She sat baking under the halogen lights, bunching up the sheets of her bed in her fists, not looking the doctor in the eye. Doctor Tam sat at the foot of the bed, hunched over.