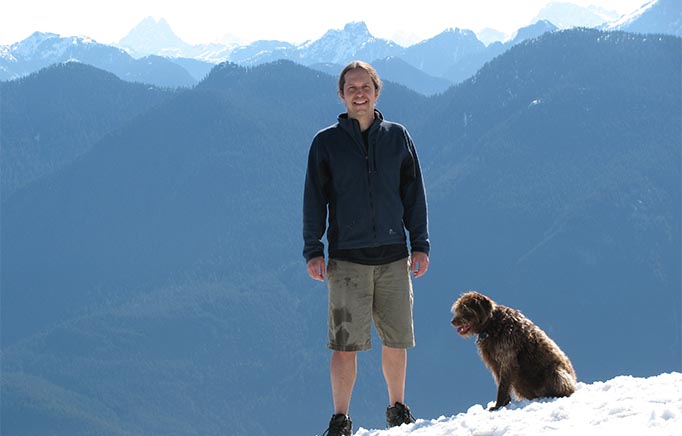 A love of computers, science and mathematics has taken Steve Krehbiel to a company that made software for a precursor to the iPad 20 years ago and, now, to a job writing software used by doctors throughout Canada.

His love of the outdoors, meanwhile, has led the Vancouver, British Columbia, resident to Canadian national and world tournaments in Ultimate — the football-like team sport played with a flying disc — and on many excursions in nature, whether on foot, snowshoes, bicycle or water.

In both cases, Krehbiel's enthusiasm was kindled during what he called "an idyllic childhood" in Bluffton, where he lived from age 3 through his college graduation in 1989.

BLUFFTON BEGINNINGS
Krehbiel's family moved to Bluffton when his father, Howard, joined the math faculty on campus in 1970. Everyone in his Sunday school class at First Mennonite Church played sports together, Steve recalls, and even before high school, he was in a group that took up Sunday-afternoon Ultimate on campus.

A cross country runner his last two years at Bluffton High School, Krehbiel was also pursuing an academic— and career—goal prior to graduation. His brother, Jon '80, was, in Steve's words, "a computer guy," and he had already started programming on a Commodore 64, an early personal computer. "That's what I wanted to do," he says.

"I had some options to go other places" for college, he notes, but his father's faculty position was "a big incentive" to stay in Bluffton. In addition, both of his parents were alumni — each in the class of 1948 — as were all three of his older siblings. "That was the family tradition," he adds. 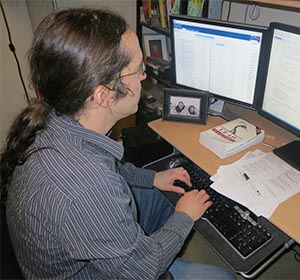 "There were challenges in those computer science courses; I got to do really interesting things," says Krehbiel, whose favorite class involved programming languages and compilers, which take programs and condense them into computer language. "You're creating something that creates things," he explains.

Because of Bluffton's size, "you got to talk to professors and get individual attention"— and as much academic challenge as you wanted, which prepared him for graduate school, he says.

And because his father had gone to graduate school, it was a "natural progression" for him as well, according to Krehbiel, adding that he also wanted to take more courses. Aiding that decision was the fact that, while he wanted to do something with computers and science, he didn't know exactly what, he admits. "I didn't really know what the possibilities were," he says, noting that while there was work in the defense industry, that wasn't for him, and the then-young software industry wasn't on his radar yet.

GO WEST, YOUNG MAN
Finding a graduate program that was "up my alley," combining science and computer science, Krehbiel went to Washington State University, where he earned his master's degree in 1991. Looking back, he says he doesn't believe his graduate-school peers had received the well-rounded undergraduate education that he credits Bluffton for providing. "I was quite proud of the fact I went to a liberal arts school," he notes.

After graduating from Washington State, Krehbiel returned to a small Vancouver company where he had dropped off his resume several months before but was told to come back when he had his master's degree. He became the sixth person hired at PenMagic, which dealt in iPad-size tablet computing that was "a little bit ahead of its time" and fizzled by the mid-'90s when others didn't know what to do with the technology, he says.

But the company got into customer relationship management software for business—entailing a database of customer demographics and more—and rebranded itself as Pivotal Corp. Pivotal went public in 1999 and grew to more than 700 employees, but "the bottom fell out of that" and he left in 2006.

That's when he got into the electronic medical record (EMR) field, joining what began as Wolf Medical Systems to help the company modernize its software.

The business was acquired last year by TELUS, one of the largest Canadian communications companies.

Krehbiel now works on software used by doctors in various parts of Canada. The EMR technology encompasses scheduling, referral and many other functions that help retain important medical information and reduce mistakes, he explains. For example, if you're a doctor, "the pharmacist doesn't have to worry about reading your handwriting," he says.

The job provides intriguing problems to solve, he continues, and "if you can stay current and work on interesting challenges, that's fun." He also likes working in health care, which he calls "a positive thing" ethically.

ULTIMATE COMPETITION, AND RECREATION
Krehbiel has carried on his love of Ultimate in Vancouver, where he plays in a league that has hundreds of teams. "It's a very big deal here," he says, pointing out that other Canadian cities have large, multiple leagues, too. "Vancouver has produced the
world champions."

In 1998, he was a member of an all-male team that competed in the open division of the Canadian national tournament, placing 10th among 20 teams. That same year, his team traveled to the world club championships and finished 11th in the masters division, for players over 30. In 2004, he was on a masters team that was third at nationals.

Krehbiel had played Ultimate as a youngster at Michigan's Camp Friedenswald, where he also got an early taste of experiences that included weeklong camping and a canoe trip down Michigan rivers. "I did those wilderness trips four years in a row, and
that cemented my love" for the outdoors, he recalls.

Moving to Vancouver—where he met his wife, Galen Hutcheson, as well—opened up new opportunities in nature. Among other things, he has kayaked, snowboarded, bicycled and hiked in the mountains, sometimes on snowshoes.

Now with three young daughters — Lily, 6; Zephyr, 3; and Aven, 1 — Krehbiel doesn't have as much free time for some of those pursuits. But he has begun a new one — introducing his girls to nature. "I am enjoying getting the kids out hiking and camping with me," he says. "Hiking and being outdoors is my true passion."