To an onlooker, Dylan Burdette says he would appear "more likely to wear a leather coat than a lab coat."

Hair length notwithstanding, the 2005 Bluffton alumnus actually wears both — one for his vocation as a Ph.D. student in biochemistry at Rosalind Franklin University in North Chicago, and the other for his avocation as a motorcyclist.

"To me, it feels like the perfect dichotomy," says Burdette of the seeming contrast between being a scientist and a biker. "It's two groups that are easily dismissed."

But his two disparate interests — in tandem with another part of his life, as a musician — were embraced last October by Future-ish magazine, which ranked Burdette 15th on its list of the 20 most stylish male scientists of 2012. Among others on the list was bow tie-wearing Bill Nye, "The Science Guy" of television fame.

"We need more scientist bikers," commented the magazine's selection committee about Burdette, who graduated from Bluffton with a double major in pre-medicine and biology. The committee considered such variables as involvement in science, design and culture; unique hobbies; "and of course ... a great personal sense of style" in creating its stylish scientist lists, of women as well as men.

"The individuals on our list are changing the world with their innovative research and changing stereotypes every time they make an appearance expressing their oh-so-stylish selves," according to Future-ish. Unlike a "best dressed" list, the magazine added, its list "isn't about trends and expensive labels, it's about individuals expressing themselves and their individuality in their life and work."

Burdette, who was nominated for the second annual list by his wife, Diana, says he doesn't know about being a "stylish scientist" per se. But "I do consider myself a scientist with my own sense of style," he continues. "I try to live a certain style and put that out there for anybody who's interested."

The Waukegan, Ill., resident's lifestyle includes supporting local businesses and getting involved in the community, he explains, "to discourage the idea that scientists stay in labs all day." He hopes to "put the good name of science out there, too," he says, while discrediting stereotypes and trying to be a role model — a goal of Future-ish for all its stylish scientists, the magazine points out.

Burdette was impressed when he saw Future-ish's first list in 2011, he recalls, saying that "for as many scientists as there are who aren't stereotypical 'nerds,' that's how the public sees them." 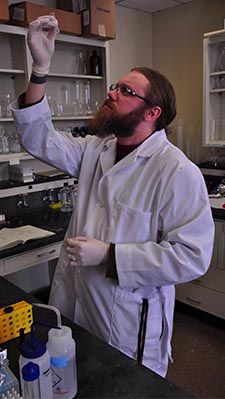 The Fredericktown, Ohio, native is the youngest of five in a family that was posted at several Native American and Canadian aboriginal reserves after joining the Mennonite Central Committee when he was 3 years old. When he was 13, the family returned to Fredericktown, where he was a home-school graduate.

"My parents really wanted me to go to a Mennonite college," he says. His father, Rob was a Mennonite pastor who remains an interim pastor for Mennonite Church USA, while his mother, Patricia, worked most recently with Mennonite Women USA.

"When I visited the Bluffton campus, I just fell in love with it," he adds, remembering a welcoming campus community — and a distinctive landmark. "I was interested in science, and I liked the 'underground bunker' (Shoker) science building. I thought that was very cool."

Burdette started at Bluffton with thoughts of becoming a doctor. During his first year, though, he successfully applied for a summer research fellowship at what is now the University of Toledo Medical Center. It was his first experience with research — looking specifically at what nerve clusters in the body regrow after amputation and thus, possible origins of "phantom limb" feelings — and "I was just blown away by it," he says.

He liked the idea that research scientists study things that "nobody has figured out before" and, while still interested in being a doctor, "I was opening my mind to different career possibilities," including research, he notes.

Fostering that interest in research were Drs. Daniel Berger and Robert Antibus, professors of chemistry and biology, respectively, at Bluffton. They also helped him develop critical thinking skills in the scientific sense, Burdette says.

At the same time, he spent about a year in a band, "Freaky Pete," which played a few shows at Common Grounds Coffeehouse & Café and one at Marbeck Center before its finale at the 2004 Riley Creek Festival.

On to Chicago
When he graduated, Burdette decided he wanted to spend at least one year doing research full time. He took a position as a research technician in a molecular biology laboratory at the University of Chicago, where he studied molecular pathways in ventilator-induced lung injuries and was a contributing author of two papers.

He left the university after one year, but, by then, he had gotten into the folk singer/songwriter scene in Chicago and met his future wife. In 2007, they started a coffee shop where they hosted open-mic sessions. A bass, banjo and cello player, as well as a guitarist, Burdette also played other coffee shops and clubs during his five years in Chicago, and continues to play on a regular basis with friends.

He had sold his first motorcycle for startup capital for the coffee shop. But against the backdrop of the growing recession, "I decided I wanted to get back into science," he says, and became a research technician at Rosalind Franklin in 2008. He remained in that position for a couple years, producing two more papers of which he was the primary author, before beginning his Ph.D. program at the medical and research university in fall 2010.

At the core of his biochemistry program is structural biology, which ultimately, in part, involves designing more effective disease-fighting drugs without side effects. He hopes to finish his Ph.D. next year and looks forward to several options include teaching, postdoctoral research or consulting.

Back to biking
A couple years ago, he was able to buy another motorcycle, a 1995 Honda Shadow 1100 American Classic Edition.

While the schedule of a graduate student doesn't allow him to ride as much as he would like, Burdette says he has been getting into "biker culture," whose freedom and camaraderie he enjoys.

Many of the negative connotations surrounding bikers are undeserved holdovers from old prejudices, says Burdette, whose father also started riding after his children were grown. The two of them have talked about making a trip to the annual Sturgis (S.D.) Motorcycle Rally, which is only about 60 miles from the Pine Ridge Indian Reservation where the family lived for six years.

The scientist's interest in biking forces people to rethink some of their preconceived notions, Dylan says, dovetailing with the intent of Future-ish in naming its stylish scientists.