As an undergraduate, Dr. Jamie Casper was pursuing two interests when he found his way from a possible career in chemistry to one in optometry. Being an optometrist has taken the 1996 Bluffton graduate to a practice in North Carolina and on 10 service trips — primarily to Central and South America — to provide free eye care and glasses to thousands of patients.

In his first days as a new student at Bluffton, Casper was jogging in preparation for baseball tryouts when members of the cross country team ran past and, looking for a new teammate, one asked if he would like to join them. "I tagged along and, four years later, I was still on the team," he says, remembering his roots as a running enthusiast who has completed two marathons.

Everybody who grew up in the 'Star Wars' generation wants to play with swords and pretend they are glowing sticks."

Since moving to North Carolina in 2005, Casper has taken up another hobby in which he competes — fencing. Invited to try the sport by a patient who owned a fencing club in Wilmington — where Casper is a partner in the Cape Fear Eye Institute — he has won local competitions and earned a bronze medal at the 2009 North Carolina State Games.

OTHER COLLEGES 'DIDN'T COMPARE'
Bluffton was one of the first colleges he visited as a prospective student from Licking Valley High School near Newark, Ohio. The others, he recalls, "just didn't compare to what Bluffton offered" in terms of affordability, small class sizes and opportunities in athletics and leadership positions. The latter benefit was particularly significant, Casper says, because "I was a leader in high school, and I wanted to continue to learn and grow" in interactions with others and problem solving, among other skills that would be helpful beyond college.

Bluffton also had a strong chemistry department, he adds, noting that he started school as a pre-medicine major but took on a second major, in chemistry, largely due to Dr. Stephen Steiner, a chemistry professor now at Hanover (Ind.) College. "I learned well from his style," says Casper about Steiner, whom he describes as an instructor who cared about students and was passionate about his subject matter.

For their mentorship, he also cites Dr. Donald Schweingruber, vice president and dean of student life at the time, and Dr. Mark Bourassa, then a hall director and now assistant dean of student life and director of Marbeck Center, Founders Hall and Sommer Center, and conferences. Bourassa was among those who helped him enhance his leadership skills, which "was probably the best thing I could take from Bluffton," says Casper, who served as Student Senate president on campus.

As graduation approached, he was planning to become a doctor. But as he prepared for medical school interviews, he admits "I wasn't sure that's what I wanted to be when I grew up." So he moved on instead to a graduate program in organic chemistry at the University of Toledo, thinking he could decide about his future from there. 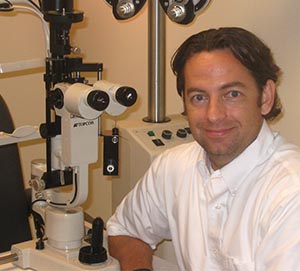 Before finishing his Ph.D. in 2000, Casper was sitting with a friend late one night in a chemistry laboratory at Toledo. "We both knew we weren't going to be lab rats," he says, calling himself too extroverted for that life. His friend finally said he wanted to be an eye doctor, asking Casper if he had ever met one who was in a bad mood or didn't enjoy it.

That got him thinking about health professions again and, realizing "I'd never met an eye doctor who didn't like what he did," he decided to enter The Ohio State University College of Optometry in summer 2000. That same year, he married Beth Long, a 1995 Bluffton graduate in mathematics and now associate director of financial aid at the University of North Carolina-Wilmington.

During his third year of optometry school, Casper became involved with Student Volunteers for Optometric Service to Humanity (SVOSH). The program takes students to rural areas of a foreign country, where, for one week, they provide comprehensive eye exams to 1,500-2,000 people and distribute glasses collected and contributed by Lions clubs. The eye doctors who accompany the students may be the only ones their underserved patients ever see in areas where, he says, "eye care doesn't exist."

On his first trip, to Honduras in 2002, Casper encountered a middle-aged man who couldn't blink because of an inflammation that causes the eyes to swell and leads, if untreated, to painful scarring and blindness. He treated the man's eyes with anti-inflammatory drops and gave him artificial tear ointment, but told him there was nothing more he could do. On Casper's last day before going home, the man returned to the clinic, waiting five hours in line to see him and then, without a word, giving him a hug before leaving. The man's friend explained that the drops and ointment had provided his first pain relief in years, and he just wanted to express his gratitude.

"It keeps you grounded," says Casper about SVOSH, which has also introduced him to patients—often with rare eye diseases—in Nicaragua (four times), El Salvador, Ecuador, Haiti, Peru and, last year, Bolivia. "Their number-one complaint is they can't read the Bible."

"It's a very important part of my life," adds the optometrist, who now helps teach current Ohio State students who invite him on the trips.

THE EYES, AND N. CAROLINA, HAVE IT
Casper, who is particularly interested in ocular disease and trauma, says eyes are "the window to health" and even capable of telling where someone is from. "Different bugs live in different soil," and there's one particular to Ohio that gets into eyes and scars them in a certain pattern, he explains, noting that arthritis can find its way into eyes as well. An eye exam is one of the last things most people make time for, "but we can tell so much from it," he says.

Moving in 2005, he accepted a position with a surgical group in Wilmington. Three years later, he decided to go into private practice and, in 2010, became co-owner of Cape Fear Eye Institute. Last year, he received the 2011-12 Young Optometrist of the Year award from the North Carolina State Optometric Society, which he currently serves as a trustee for education.

OUTSIDE OPTOMETRY
Built a few years ago, the new Cape Fear office includes a 1,000-square-foot area for lunch-hour workouts that Casper deemed important from a health standpoint. He credits his running start at Bluffton with fueling that interest in health, adding that his 6-year-old son, Kendall, now wants to run, too, having covered his first one-mile race at the same time his dad was running a 5K.

Last year, Casper competed in two military-style events— a three-mile "Warrior Dash" and an 11-mile, obstacle-filled "Tough Mudder," which he calls a test of strength and endurance, as well as teamwork. "I hadn't been challenged like that since my days at Bluffton," says the former cross country and track athlete, who also has a daughter, 4-year-old Morgan.

Fencing, meanwhile, offers a different mental challenge on top of competition, he points out. "They call it mental chess for a reason," he says about the strategy involved. Ohio State has one of the best collegiate fencing programs in the country, according to Casper, but he didn't think he would ever try the sport until he was asked by his patient in Wilmington. Since then, in addition to competing, he has served three years as secretary of the North Carolina Division of the United States Fencing Association.

"Everybody who grew up in the 'Star Wars' generation wants to play with swords and pretend they are glowing sticks," he says.