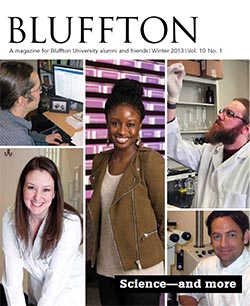 Dylan Burdette, a 2005 Bluffton graduate in pre-medicine and biology, was named among Future-ish magazine's 20 most stylish male scientists of 2012, based upon his convergent interests in science, motorcycles and music. But Burdette is not the only Bluffton alumnus trained and working in the sciences, who, playing against popular stereotypes, has cultivated other interesting pursuits as well. The graduates whose stories follow are also among the alumni doing just that.