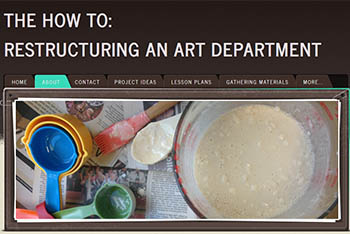 Arts in our Community 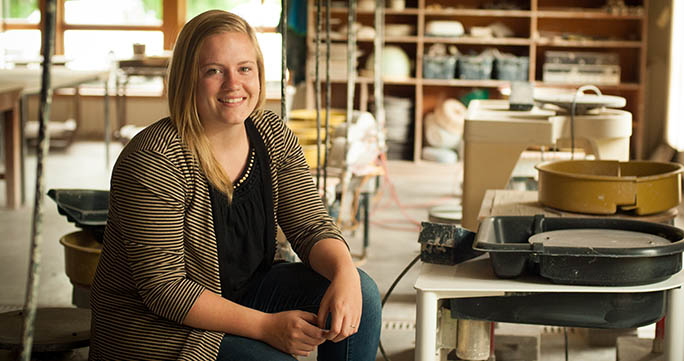 Making Something out of Nothing

If one man's trash is another man's treasure, consider Megan (Moreo '14) Etzkorn one of the treasure hunters.

It's not hard to find, and the 2014 art education alumna contends that a lot of it can easily be reused, too. She points in particular to art classrooms in school districts where financial problems put art instruction budgets on shaky ground.

Etzkorn makes her case in a Bluffton departmental honors project that she began developing early in her junior year. "Zero Dollar Art Department: Creating Something out of Nothing" includes a short book and a website—at refreshartdept.weebly.com — with art project ideas, lesson plans and suggestions for gathering materials.

Gregg Luginbuhl, newly retired professor of art at the university, notes that his student assistant's honors project could have practical applications.

"In a cash-strapped school, to avoid the 'nuclear option,' it could definitely be implemented," Luginbuhl asserts. "As Megan and I discussed, it would take auxiliary space to receive, sort, prepare and store the materials, and consistent volunteer help, to make it work.

"More feasibly," he adds, "it could be partially implemented, maximizing recycled materials readily available in a given school district to reduce a budget or save budgeted money for needed tools and equipment."

The groundwork
The project enabled Etzkorn to combine her love of art with an interest in recycling, whose value, she says, "hit home" with her for the first time as a junior at Delphos (Ohio) Jefferson High School. That year, her English class visited a recycling center in nearby Van Wert that took in—and gave out—used books, creating a library where she and her classmates saw how one element of recycling worked.

Later, she worked a summer job at a national pharmacy chain's local store, where old magazines were thrown away when new issues arrived. Seeing how a large corporation handled its excess inventory "made me realize there's so much out there that's available" for reuse, she says.

As a Bluffton sophomore in an Issues in Education class, Etzkorn had to write a paper and make a presentation about something she cared about. She chose to look at whether art teaching jobs were being cut, and why they shouldn't be, "just to reassure myself " about her career choice, she recalls.

She found that art teaching positions were not being reduced—there had actually been growth in the number of those positions nationwide from 2000-10, she says. But budgets for the arts, including performing as well as visual arts, weren't immune from cuts.

She believes arts programs aren't eliminated in some cases because schools see the importance of students using their creative side—the so-called "right brain." Her goal, she says, is for students to take excess material and use their right brains "to figure how it all fits in art."

People are generally set on seeing certain objects—a pop can, for example—as having only their first, intended function, Etzkorn explains. But other possibilities exist for used objects, and once someone knows techniques and elements of art, "you can use any material" to make it, she maintains, adding that the principle isn't about being thrifty.

The project
Etzkorn learned about departmental honors projects— only a handful of which are undertaken by Bluffton students each year—while updating university Web pages as a public relations student worker in summer 2012. "It sounded fun," says the Delphos resident, who again sought something she cared about, namely "reusing everything that everybody else thought was junk, and figuring out how that trait could help me in the education field."

Hatching the idea of creating a book as a guide for a "zero-dollar" K-12 art department, she then developed a mandated project proposal that included creating art from excess and discarded materials and writing to businesses to ask if they would donate such materials.

A three-member sponsoring committee led by Luginbuhl signed off on the proposal, as did the university's Special Studies and Honors Committee. The latter panel's approval came with a recommendation that led, Etzkorn says, to her "best decision"—building a website as an online home for her work.

Asking area businesses about their willingness to participate, she received a small response, but four of the five who did reply to an email survey indicated they would donate materials. She was also heartened by what she heard from Charity Tripp, a friend and fellow 2014 alumna who worked at Findlay's Awakening Minds Art.

Awakening Minds, which offers therapeutic and educational art programs, receives donated materials and supplies from companies which then display student work at their stores. "That was reassuring to me," Etzkorn says.

She came up with more than a dozen projects—such as papier-mache with a flour-based paste—and started to make them so she could take photos for the book, which includes step-by-step instructions. She also added a 10-week curriculum to the publication, which she finished in September 2013. Work on the website followed in November and December, before she began student teaching at Lima Shawnee High School last January.

When she saw the finished online product—titled "The How To: Restructuring an Art Department"— "I was no longer as nervous," she says, about the project getting the needed, final approval of the full Bluffton faculty. Following her oral defense of the project— also required—the faculty reviewed it, then approved it in April.

The future
Etzkorn would like to do a social media launch of her work, "because the initial goal was to reach as many people as possible," she points out. "I firmly believe it would work," she adds, "and it needs to happen" in order for more people to see other  possible functions of existing objects.

She will have a chance to put her belief into action this fall as the new art teacher at Lima Central Catholic High School. Having also considered teaching home-schooled students in a home studio, freelance graphic design and selling ceramics and other art at festivals, she fused her interests in a proposal that won the Bluffton Center for Entrepreneurs' "Big Idea" contest earlier this year. She collected $250 for her idea, which envisioned an inner-city building where art could not only be created—with donated materials—but also exhibited and purchased.

Her departmental honors project "will provide some very practical background as Megan begins a teaching career," notes Luginbuhl, predicting she will be "a resourceful teacher" at any level.