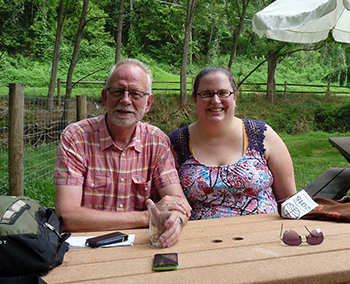 Jackie Wyse-Rhodes has reached into her past for what she says some might consider a “radical idea” for the church’s future.

But the reaction was positive, the assistant professor of religion adds, when she and a former co-worker in missions in the Netherlands presented it at July’s Mennonite World Conference (MWC) Assembly in Harrisburg, Pa.

With Mennonite Mission Network from 2002-07, Wyse- Rhodes worked full time for four years—then volunteered the final year—at a “drop-in center” in the Dutch city of Almere, east of Amsterdam. Started by the Dutch Mennonite Mission Board, and among the first of its kind in the country, the Almere center has often been described as a “living room for the neighborhood,” or “house of hospitality” for anyone seeking meaningful community or just a listening ear, she says.

During her last year of full-time work there, the center also became the inspiration for a curriculum that she and co-worker Gerrit Jan Romeijn wrote for Dutch congregations on how to better relate to their neighborhoods. The underlying premise is that churches need their neighborhoods, and not just the other way around. “Congregations often focus only on what they can do for their communities,” she explains. “This course challenges that traditional approach to outreach.”

In the curriculum, she and Romeijn wanted to take what they had learned about missional community involvement and help others apply it in their own backyards, Wyse- Rhodes notes.

A starting point was the Asset-Based Community Development model, which she studied as a graduate student at the Associated, now Anabaptist, Mennonite Biblical Seminary. Developed in the Chicago area, the model holds that it is more fruitful for the basis of work in a community to be the gifts and talents found there, rather than its deficiencies, she says.
Starting from a “negative” place, of trying to meet needs instead of seeing that both sides bring strengths to the table, can create situations of unhealthy dependency, Wyse-Rhodes continues. But starting from a place of “strength” allows community work to more easily flourish, she maintains.

The curriculum takes churches through nine sessions, beginning with foundational topics such as everyone’s creation in God’s image; mission work equaling participation in God’s work; and the “theology of presence” being a form of mission work. She defines the theology of presence as emphasizing “‘being’ rather than ‘doing’—a ministry of walking alongside people without any other goal or agenda.”

Next is the creation of “inventories of giftedness,” Wyse-Rhodes says, both within a congregation and the neighborhood/community. Community assets can be people or things (parks and libraries, for instance), which congregation members are tasked with discovering via surveys or simply observing in the neighborhood.

The congregation then works together to hone in on one project that brings its gifts together with those of the neighborhood.

“I think it can be a radical idea that the neighborhood has something to offer the church,” says Wyse-Rhodes, noting that she and her co-presenter were pleased with the response from the 50-60 participants in their MWC workshop.

A couple participants said it was “really challenging” to think about the church needing the neighborhood, she relates, and the discussion raised questions, such as how a “neighborhood” might sometimes be defined and chosen in an era of social media.

She and Romeijn have a list of workshop participants who expressed interest in trying the curriculum in their roughly 30 congregations.

Romeijn has presented the course to a few Dutch congregations, and he and Wyse-Rhodes are now translating it to English, hoping to have it available online this winter.

They proposed it as an MWC workshop topic about a year ago and learned it had been accepted—and not all proposals were—early this year.

Wyse-Rhodes hopes the curriculum will spread and help create a change in thinking. The traditional posture of some churches to their communities can be read as “you need us and what we have to offer”—a form of “guilt trip,” as she describes it. “I think losing that is a good thing.”

Wyse-Rhodes, who previously taught at Bluffton in spring 2012, is nearing completion of her Ph.D. in Hebrew Bible from Emory University in Atlanta.