Professional Achievement Award 2012
The award recognizes an alumnus for continued pursuit of intellectual growth and exploration of creative ventures in a chosen field, resulting in notable career success and recognition. 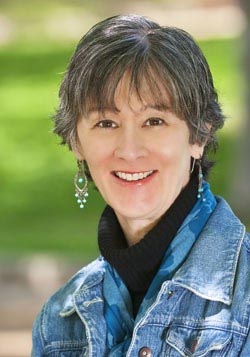 During 26 years at the University of Memphis, Dr. Julia Heath had been a faculty member honored nationally for her teaching of economics, chair of the economics department for nine years and, beginning in 2002, director of the university's Center for Economic Education.

Last year, asking herself "What else can I do?" but not interested in other potential administrative jobs at Memphis, she decided to move on.

That move brought the Bellefontaine, Ohio, native and 1978 Bluffton graduate back to the state last March as director of the University of Cincinnati's Economics Center.

"Professionally, it was time" for a change, says the 2012 recipient of Bluffton's Professional Achievement Award. But it was also a good time personally, with her daughter graduating from high school and preparing to leave for college this fall in Philadelphia, and considering the prospect of returning to her home state.

"I liked the idea of coming back to Ohio," says Heath, who heard an admissions pitch for Bluffton as a high school student and enrolled without ever having visited campus. Among other things, she liked the sound of its focus on teaching—a feeling reaffirmed by her experience with faculty as a double major in psychology and sociology.

"What Bluffton did for me was raise the possibility that teaching was a calling," she says, explaining that "it has everything to do with who you are" rather than what you do.

She was particularly influenced by Kay Hardesty, a sociology faculty member who interested her in pursuing a doctorate. Her Ph.D. field changed first from sociology to operations research and then to economics, when Heath was smitten by a required microeconomics theory course that she was taking in the summer at the University of South Carolina "to get it over with," she says.

Completing her doctorate in 1986, she began her teaching career at Memphis. Her honors there included the Thomas W. Briggs Foundation Excellence in Teaching Award and the Distinguished Alumni Award for Teaching. In addition, she was named Financial Literacy Educator of the Year by the Tennessee Bankers Association in 2006 and by the National Association of Financial Literacy in 2008. And in 2010, the Carnegie Foundation for the Advancement of Teaching recognized Heath as Tennessee Professor of the Year.

Also at Memphis, she started the Smart Tennessee financial literacy program, along with the Center for Economic Education.

The Smart Tennessee program, now for children in kindergarten through eighth grade, teaches students "how to make a good decision about money"—which she says is what they need to know first about finance. She maintains that students should be learning the opportunity cost of their economic decisions, meaning what they give up as a result of those decisions. While teaching basics like checkbook balancing is fine, she adds, "it does come down to choices and what are the consequences of choices." That kind of financial education, she says, will empower students and help them better participate in the broader economy as adults.

Toward the same end, Heath helped lead successful efforts to bring about Tennessee laws that require high school students to pass a one-semester, financial literacy course—beginning with this year's seniors—and year-end, financial literacy testing of students in grades 5 and 8.

Economic education, including teacher training, is central both to the center she directed at Memphis and the one she now heads at Cincinnati. There, the Economics Center also has a research function, producing economic analyses for corporations, governments and nonprofits. "This is an opportunity to explore what economic education can be with more resources at my disposal," she says of her new position.

But Heath will continue to teach one course each spring as well, and is also writing two economics-related columns per month for the Cincinnati Enquirer, one of them for young people.

"The way I teach has changed, but I'm still teaching, because that's who I am," she says.