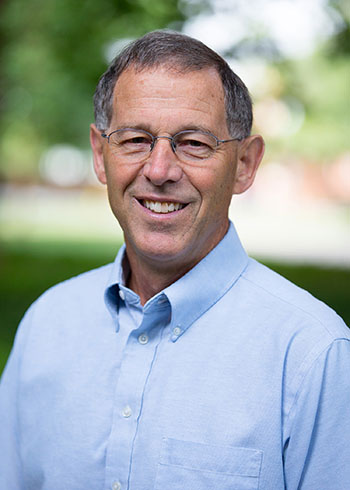 2017 PROFESSIONAL ACHIEVEMENT AWARD
The award recognizes an alumnus for continued pursuit of intellectual growth and exploration of creative ventures in a chosen field, resulting in notable career success and recognition.

Accidently at Bluffton
A knee injury followed by a better-than-expected recovery brought Dr. Marvin Hall ’77 to Bluffton. Believing a high school track injury would prevent him from playing college sports, Hall planned to attend The Ohio State University. Instead, the summer after high school graduation, he was given the all clear from his doctor and was urged to pursue his athletic interests. Bluffton was one of the few schools still accepting students in late June.

However, the last minute decision has maintained a longterm impact on Hall, a professor of forage management at Penn State University and this year’s recipient of Bluffton’s Professional Achievement Award.

“Bluffton provided an excellent education. It was the perfect fit for me. As an 18-year-old leaving home for the first time, Bluffton allowed me time to grow and there was mentoring so that I didn’t flunk out. If I had gone to a big party school, I might have never made it.”

From mentee to mentor
As a biology major and football and track athlete, Hall did “make it” thanks to mentors such as Dr. Richard Pannabecker and Dr. Bob Suter.

“Dr. Pannabecker taught me that you could be religious and still have fun. His sense of humor was really dry. Sometimes he would say something in class and it would dawn on me about five minutes after he said it that it was a joke,” Hall said.

Dr. Suter became an invaluable resource when Hall eventually did go to Ohio State to earn his master’s degree. Suter, who was spending time at Ohio State while on sabbatical, and Hall met back up at a church function in Columbus. “I was taking a couple of really tough organic chemistry classes and he helped talk me through those. There were times after college that Bob plugged in and helped out. I always enjoyed running into him.”

As a professor in the plant science department at Penn State for the last 27 years, Hall is mentoring students of his own and leading research into renewable energy.

“Teaching is really rewarding,” Hall said. “You build relationships that last for years after the students have left your classroom.”

Prior to teaching in the classroom, Hall served as an extension specialist in forage production and utilization at Penn State. In this role, Hall taught county extension agents and farmers the best practices for forage management such as seeding methods and disease control. Forages are plants, such as alfalfa and grasses, which humans use indirectly via livestock.

Research for the future
More recently, Hall has focused his research on a plant called switchgrass and its future as a biofuel.

“When I started at Penn State, we didn’t have anybody working on biomass production. I was dealing mainly with forage crops and it became obvious that it was basically the same thing. We were growing crops for maximum yield and maximum quality for animals to consume. In growing biomass crops for fuel production, you just have to let the plants mature a little bit more and you get maximum yield and maximum quality for fuel production.”

Corn is currently a popular biomass crop. It produces ethanol which is in nearly all of the gasoline sold in the United States.

However, “corn is grown on some really prime farmland and when push comes to shove that corn could be used directly to feed humans,” Hall explained.

Instead, Hall is working to grow switchgrass on the desolate areas of Pennsylvania left behind after the land was stripmined for coal.

“We’re dealing with sites where barely anything is able to grow. The land usually looks like a moonscape with rocks all over it and maybe a little bit of soil, and we’re trying to grow plants on that,” said Hall.

Hall understands that people aren’t going to instantly switch from using coal and natural gas to using renewable sources of energy such as switchgrass as their main fuel source, but he knows one day in the near future there will be a need.

“Right now, with the Marcellus Shale and gas being so cheap, it’s not very economical, but eventually that gas is going to run out, and we’re going to need something else,” he explained. “We’re getting some of the basic research done into growing switchgrass now, and that will pay big dividends— maybe not in the next 10 years—but in 50 years people are going to be saying, ‘we need to be doing something else.’”