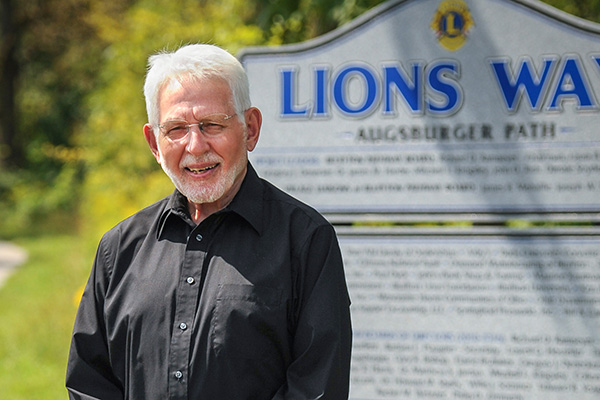 A lesson from Dr. Raid

Richard (Dick) Ramseyer ’57 spent his life finding ways to better the lives of others and the communities in which he lives, which is why he was selected as this year’s Lifetime Service Award recipient, presented by Bluffton’s Alumni Association. The Lifetime Service Award recognizes an individual who has dedicated his or her life to heartfelt service to people, community or church. Inspired by personal faith in God and the ultimate purposes of His kingdom, this individual has made a difference in the lives of others. After a lifetime of service, Dick credits his accomplishments to his education at Bluffton. “Dr. Howard Raid was a very important part of my life,” said Ramseyer. “He told us at every class, ‘Get involved in your community,’ and I really took that to heart. That’s been a part of me ever since college days.” Ramseyer didn’t plan to make a life in Bluffton; in fact, he didn’t even plan on graduating from the college. He and a friend thought about coming to Bluffton College for one year and then transferring to a university back home in Illinois. “That didn’t happen,” said Ramseyer. “We stayed. You kind of get hooked on things, and as a result of that, you’re here for almost a lifetime.”

After graduation, Ramseyer moved back to Illinois and married Elfrieda (Landes ‘58). During the summer of 1969, Ramseyer was asked by President Kreider to join the administration in the advancement division at Bluffton, so the couple made their first return. They resided in Bluffton for 14 years. During this time, Ramseyer helped develop the following at the university: Shoker Science Center, Rosenberger Drive greenhouse, groundwork for the Emery
Sears Athletic Complex and SCOPE magazine. He was also involved in the Bluffton University Nature Preserve, Bluffton Industrial Growth Committee, Bluffton Housing Corporation, Bluffton Expansion Corporation, Bluffton Community Progress Corporation, Bluffton United Way Board and Bluffton Business Men’s Association (Chamber of Commerce). After resigning from the college, Ramseyer formed Demart Enterprises, Inc., and with Paul Snyder founded Bluffton Construction Company, Inc. After living in Colorado and Iowa and serving their communities in those states for more than 20 years, the Ramseyers determined nowhere else felt quite like home as Bluffton did. “We looked in numerous places; we looked in Florida, we looked in Arizona and just didn’t feel comfortable,” said Ramseyer. “We always just kept coming back to Bluffton. It’s got all the things—the things you want in life to be close by.”

In 2001, they returned to home to Bluffton and Ramseyer picked up right where he left off—immersing himself in community projects and improvements. Although Ramseyer has participated in many village projects, the most notable is the Bluffton Bike and Pedestrian Pathway. Ramseyer, among others, saw a need for something which would allow community members to safely bike, run and walk throughout the village, thus the Bluffton Pathway Board was born. “We really pushed for a body to be appointed to cause this to happen and be implemented, thus the Bluffton Pathway Board and Bluffton Lions Foundation were born,” said Ramseyer. The Bluffton Lions Foundation, in collaboration with the Village of Bluffton, has received more than $500,000 in grants to help construct the pathways over the last nine years. Four Lions Way Pathways and a park have been constructed with more to come. Currently, Ramseyer is a member of the Bluffton Lions Club, Bluffton Investment Club, Allen County Bike and Pedestrian Task Force, Bluffton Chamber of Commerce (president), Bluffton Lions Foundation (chair), and Bluffton Pathway Board. He also serves on the village zoning committee and often volunteers at Bluffton University. Dick and Elfrieda are active members of First Mennonite Church in Bluffton. They have two children: Marty (Ramseyer ’81) Barnett and Rick Ramseyer ’83, a son-in-law and a daughter-in-law and two grandchildren.