2009 LIFETIME SERVICE AWARD
The award recognizes an individual who, inspired by personal faith to make a difference in the lives of others, has dedicated his or her life to heartfelt service to people, community or church. 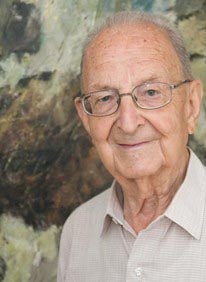 Born into a German Mennonite family, Herman Neff was a child in Adolf Hitler's Germany and drafted into the German army at age 16. "I was young and carried away like everyone else," says Neff. "To this day, I have to explain myself because it's impossible for you, or my own kids and now grandchildren to understand . . . to lose all judgment and to follow." Neff says he was saved twice, once by a head wound and, again, by his capture as a U.S. POW in Italy and subsequent meeting with Harold S. Bender, dean of Goshen College.

International student.
Part of the first Mennonite groups to join in rebuilding Europe, Bender arranged for Neff and other young Germans to go to school in the U.S., specifically Goshen and Bluffton. Neff chose Bluffton. "It was such an unusual thing, that there was a German student on campus," says Neff. "Dean Jacob Schultz took me into his home because of the language barrier." He also lived with President L. L. Ramseyer's son, Robert, in Ropp Hall. While taking business classes, Neff realized that he could start a profitable business in Germany with potato chips. He had tasted them stateside but never seen them back home. After graduation, Neff hitchhiked across the U.S., visiting factories and learning how to make chips by hand.

Peeling potatoes.
Neff returned to Germany with a business degree and manufactured chips from an aunt's basement, while studying at the University of Munich. Klips Chips were a hit with American soldiers in Germany's American-occupied zone. In 1951, Neff traveled to Canada. In Kitchener, Ontario, he met Mennonite potato chipper Edward Snyder and was hired to peel potatoes.

Serving the church.
In 1978, Neff chose to retire to serve the church. He spent 10 years with Mennonite Central Committee Canada as director of SelfHelp Crafts Canada, the precursor to Ten Thousand Villages Canada, establishing its head office in New Hamburg, Ontario. Neff traveled the globe, visiting artisans who created the crafts, and made sure that the retail stores had enough volunteers. He also oversaw the building of a storage warehouse. Today, more than 2,000 volunteers work to support the 50 Ten Thousand Villages stores across Canada. "My hope was to contribute to the work of the church in an effective and meaningful way," says Neff. "My Mennonite heritage, taken for granted during my youth, has become even more meaningful and precious to me."