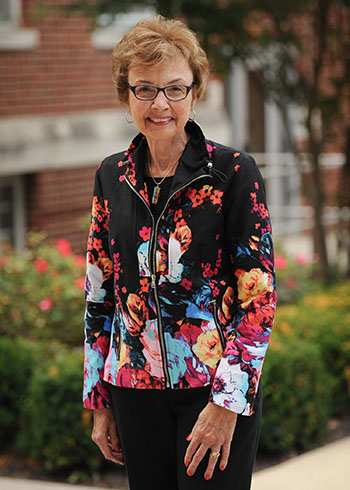 2017 FACULTY/STAFF SERVICE AWARD
The award recognizes a former faculty or staff member who fostered a spirit of community on campus through relationships with others, including students whom the recipient mentored and inspired.

Starting anew at Bluffton
On Barb Stettler’s first tour of campus in 1970, she broke down crying. This might seem like a contradiction, but it was the beginning of 30 happy years at Bluffton.

“I was just shocked and the tears rolled when I saw the department,” said Stettler, associate professor emerita of family and consumer sciences. Just days earlier, Stettler had agreed to head Bluffton’s home economics department sight unseen. The once strong department had been neglected by a string of part-time professors and the foods lab was nearly nonoperational.

When the tears dried, Stettler replaced them with steadfast determination, and thanks to loyal alumni and community outreach efforts, funds were raised so that Stettler could remodel and restore the foods lab.

Stettler is being applauded for her achievements as this year’s recipient of the Faculty/Staff Service Award. The award recognizes a former Bluffton faculty or staff person who fostered a spirit of community on campus.

By advancing course offerings, career options were increased for students following graduation. Under her leadership, the department developed majors in clothing/textiles/ merchandising, child development and wellness.

Also, she developed a food and nutrition major for the department. Not being totally satisfied, Stettler developed additional coursework, wrote a lengthy proposal, organized an on-site visit and in 1986, the department was granted American Dietetic Association (ADA) accreditation. “I was absolutely thrilled for my students,” Stettler said.

During her 30 years, the general education requirements at the college changed several times and Stettler campaigned to have courses from her department included in each new program. “My philosophy was, if we’re going to be a department at Bluffton then we are going to be a fully participating department,” Stettler explained. She also helped teach the senior capstone course and a course for the evening BCOMP program.

In 1978, Stettler made her first of six trips to Jamaica. In the summers of 1978 and 1979 she was asked to serve as a nutrition lecturer alongside officials in the Jamaican Ministries of Health and Education in a three-week maternal and child nutrition seminar. Then, in 1989, she spent two weeks in Jamaica revisiting malnutrition issues during a sabbatical. In 1996 she again returned to Jamaica to make preparations for leading cross-cultural experiences for students in 1997 and 1998.

Stettler was involved in the life of the college in many other ways including being elected faculty chairperson for a year. “I think my passion for protecting my department led me to accept serving on almost every committee at some time,” said Stettler.

For nearly 20 years, Stettler served as the football team dietitian, keeping weight charts and planning all their pregame meals.

Under Stettler’s leadership, the department facilities were significantly remodeled twice, plus Mara Alva House was remodeled to accommodate men, and in 1989, Stettler led the campus in celebrating Mara Alva’s 40th anniversary, which included a visit from its donor, Dr. Edna Ramseyer.

It’s all about the relationships…
While programs, facilities, recruitment and leadership were important, Stettler says the relationships formed with students were key. “The interactions with the students are absolutely what I take away from my time at Bluffton. In fact, I’m meeting several of them for dinner. They invited me to join them! I haven’t seen these kids,” said Stettler pausing to laugh, “these professional women in years. I’m thrilled!”

Stettler’s impact continues to be felt by alumni and students today. After retirement in 2000, Stettler met a current student who excitedly exclaimed, “I’m so happy to meet you. You’re the founder of food and nutrition at Bluffton!”

While her legacy endures, she’s also excited about the program’s future, with new state-of-the-art facilities to be constructed in the upcoming Austin E. Knowlton Science Center. “I’m very pleased with the direction of the program,” said Stettler. “There is continued growth in food and nutrition and the addition of a post-graduate dietetics internship at Bluffton University gives national recognition for the program. Now my tears are of joy and feeling abundantly blessed!”