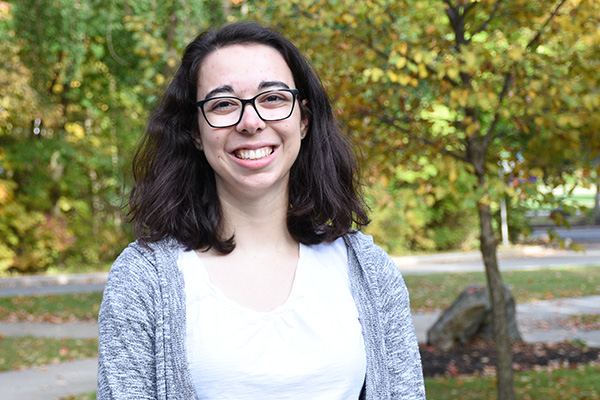 Though the areas of study might seem like an unusual combination, the music and dietetics double major has been integrating these two interests since she was young.

Emma Cobb, a Bluffton University senior from Archbold, Ohio, is pursuing two very different passions in her pursuit to earn a degree—music and nutrition. Though the areas of study might seem like an unusual combination, the music and dietetics double major has been integrating these two interests since she was young.

“When I was in fourth grade, I started 4-H and I started baking in the kitchen. I fell in love with it,” Cobb said. “My mom was also a music teacher, so she taught me piano starting at a really young age, and in fifth grade, I started playing trombone. All throughout my childhood, food and music were really central parts of my life.”

Now in her final year at Bluffton, Cobb is still determining how she will utilize both degrees after graduation. However, she is certain she will pursue a dietetic internship to become a registered dietitian, but she’s also considering graduate work in music on top of that. At the very least, she knows she wants to continue playing music in a community band, and it’s fun to dream of the possible connections.

“I could become a registered dietitian and a music therapist and have a private practice or work in a hospital. I could be a dietitian in a nursing home but also play music for residents or help organize music events there,” Cobb said. “Dinner theater is another option, being able to look at it from both perspectives and help organize the event.”

Wherever her future takes her, she feels as though her ability to juggle the high standards of both nationally-accredited programs will help her be successful. Cobb has taken between 17 and 19 credit hours each semester, along with four summer classes, to ensure she stays on track. She credits her advisors, Dr. Roy Couch, associate professor of music, and Dr. Deb Myers, health sciences department chair, as being an integral part of making the double major possible.

“Once I realized I could potentially finish in four years, we figured out a game plan,” Cobb said. “Those two have been absolutely incredible; without them I don’t think this double major could have been accomplished.”

“It stood out to me how friendly they were in general and how invested they were in a student who was interested in coming but not committed to the school already,” explained Cobb. “It really gave me a feel for the type of community Bluffton is.”

Bluffton is one of two private, liberal arts colleges in Ohio with a nutrition and dietetics major leading to a post-baccalaureate internship, dietetics registration and licensure.